SEOUL, Sept. 11 (Yonhap) -- South Korea has already developed a plan to annihilate the North Korean capital of Pyongyang through intensive bombing in case the North shows any signs of a nuclear attack, a military source in Seoul said Sunday.

"Every Pyongyang district, particularly where the North Korean leadership is possibly hidden, will be completely destroyed by ballistic missiles and high-explosive shells as soon as the North shows any signs of using a nuclear weapon. In other words, the North's capital city will be reduced to ashes and removed from the map," the source said. 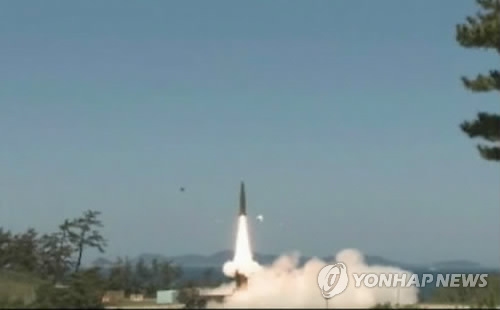 The disclosure of the detailed bombing operation came after the Defense Ministry reported the "Korea Massive Punishment & Retaliation" (KMPR) to the National Assembly last week in response to the North's fifth nuclear weapon test.

"The defense ministry's operational concept 'Korea Massive Punishment & Retaliation' is aimed at wiping a certain section of Pyongyang completely off the map," the source noted.

The operational concept is intended to launch pre-emptive bombing attacks on North Korean leader Kim Jong-un and the country's military leadership if signs of their impending use of nuclear weapons are detected or in the event of a war, the source added.

South Korea plans to mobilize its locally developed surface-to-surface ballistic missile arsenal for the operational concept, including Hyunmoo 2As, 2Bs and Hyunmoo 3s, according to the source.

By next year, the military plans to finish launch tests of the missiles and sharply expand the Hyunmoo missile arsenal, the source said.

"The KMPR is the utmost operation concept the military can have in the absence of its own nuclear weapons," he also noted.

Another source indicated the military has recently launched a special operational unit in charge of destroying the North Korean military leadership.

"This military unit is dedicated to targeting the North Korean leadership and launching retaliatory attacks on them," the source noted.