The Korean Central News Agency (KCNA) said the Pukguksong-2 strategic weapon system was successfully test-fired Sunday. It added that the missile launched from a mobile launcher used solid propellants and a new high-thrust engine developed in the country. The missiles also proved it can engage in evasive maneuvers during flight, the North said.

North Korean leader Kim Jong-un was present for the launch and stressed that with the Pukguksong-2, Pyongyang now has another means to deliver nuclear weapons. The country has tested a total of five nuclear devices since 2006, with two being detonated last year.

The missile was launched at a high angle to take the security of the neighboring countries into consideration. The test-fire proved the reliability and security of the surface launch system, and the new engine, the news agency said.

"Now our rocket industry has radically turned into high thrust solid fuel-powered engine from liquid fuel rocket engine and rapidly developed into a development- and creation-oriented industry, not just copying samples," Kim was quoted as saying by the KCNA in English.

The development of the new strategic weapon system will allow the People's Army to perform its duties most accurately and rapidly in any space: "under waters or on the land," Kim said.

The communist regime leader ordered the development of a surface-to-surface ballistic missile with extended firing range on the basis of the success made in the submarine-launched ballistic missile test in August last year, it said.

On Sunday, South Korea said it detected a modified Musudan type intermediate-range ballistic missile (IRBM) being fired from Banghyon air base in the western province of North Pyongan Province at 7:55 a.m. South Korea's military said the missile was fired at a high angle and reached a height of 550 kilometers and then flew about 500 km before splashing into the East Sea. 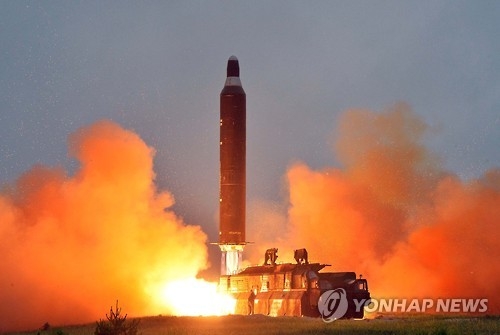