North Korea's official news agency, KCNA, said a fleet of B-1B Lancer bombers from the Andersen air base on Guam made a stealth flight over the Sangdong firing range of South Korea on Monday for about an hour on a nuclear bomb-dropping drill aimed at making preemptive strikes at major targets of the DPRK. DPRK is an acronym for Democratic People's Republic of Korea, the North's official name.

The defense ministry didn't confirm the deployment of the U.S. strategic assets to the region, where tensions have increased in recent weeks with North Korea's missile launches and the killing of Kim Jong-un's half-brother in Malaysia.

A spokesman for U.S. Forces Korea said, "We do not discuss operational matters." 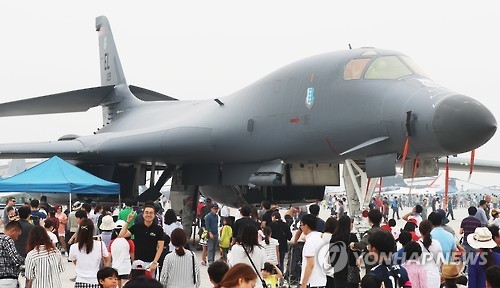 Seoul and Washington kicked off their annual joint drills -- the computer simulation-based Key Resolve and field-centered Foal Eagle -- in March. The two-week Key Resolve started Monday, while Foal Eagle runs through the end of April.

Pyongyang has long denounced the exercises as rehearsals for an invasion despite Washington's assurance that they are defensive in nature.

The communist North also blasted a joint drill by South Korea, the United States and Japan to detect and trace North Korean missiles. The exercise involving Aegis-equipped destroyers from the countries began on Tuesday.

The North's official news agency said this clearly shows that its enemies' reckless military act to make a preemptive nuclear attack on the DPRK has reached a "very dangerous phase."