SEOUL, April 30 (Yonhap) -- After the United States deployed a nuclear-powered submarine and an aircraft carrier to South Korean waters amid high inter-Korean tensions, North Korea on Sunday threatened to sink the underwater vessel, accusing America of stepping up military intimidation.

"The moment the USS Michigan tries to budge even a little, it will be doomed to face the miserable fate of becoming a underwater ghost without being able to come to the surface," the North's propaganda website Uriminzokkiri said in a posting.

"The urgent fielding of the nuclear submarine in the waters off the Korean Peninsula, timed to coincide with the deployment of the super aircraft carrier strike group, is intended to further intensify military threats toward our republic," the website claimed.

The guided-missile submarine USS Michigan (SSGN 727) sailed into the South Korean port of Busan on April 25 before heading out to sea four days later. The Ohio-class submarine is reportedly conducting various drills.

The U.S. has also directed the nuclear-powered aircraft carrier USS Carl Vinson to the waters near South Korea at the same time. The supercarrier is currently engaged in a joint exercise with South Korean naval forces.

The North warned that "whether it's a nuclear aircraft carrier or a nuclear submarine, they will be turned into a mass of scrap metal in front of our invincible military power centered on the self-defense nuclear deterrence." 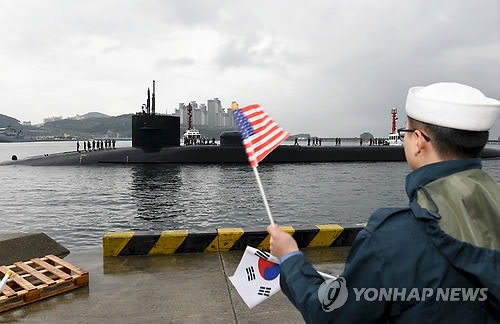