SEOUL, April 30 (Yonhap) -- South Korea's Democratic Party said Sunday it will push for a parliamentary hearing on the on-going deployment of a U.S. missile defense system, claiming that the deployment should be decided upon by the next administration.

"We will seek a hearing at the National Assembly in May in order to resolve public suspicion over the procedural legitimacy of the THAAD (Terminal High Altitude Area Defense) deployment and whether there was a secret agreement," the majority party's special committee on the issue said in a press conference.

"As President Trump has said he told our government to pay for the THAAD costs, the matter needs to be checked in detail," committee members said.

The call came after Trump said in two recent press interviews that South Korea should pay US$1 billion for fielding the defense system aimed at intercepting North Korean ballistic missiles.

In one interview with Reuters published here on Friday, Trump said, "I informed South Korea it would be appropriate if they paid. It's a billion-dollar system."

The committee accused the incumbent government of "only repeating the theory that our government does not pay the costs" when Trump claims the cost burden is something that Seoul needs to address.

"If there was any (secret) agreement on the payment of the THAAD deployment, it should be immediately made public in order to remove any skepticism," they noted.

The committee also expressed displeasure over Trump's remarks, indicating that "the Democratic Party is very concerned over the possibility that South Korea would eventually be made to pay for the $1 billion cost likely in the form of a SOFA revision or a hike in defense costs (South Korea contributes to the U.S.)," they noted.

They also called for the government to immediately stop the deployment process and leave the issue to the next government. The deployment also needs prior approval from the National Assembly, they demanded.

The THAAD deployment went into full swing last week, with the system's high-profile X-band radar and mobile launchers delivered to the deployment site in the southern Seongju county.

Local residents scuffled with the police as the THAAD equipment was brought in, which they said poses environmental and health risks. 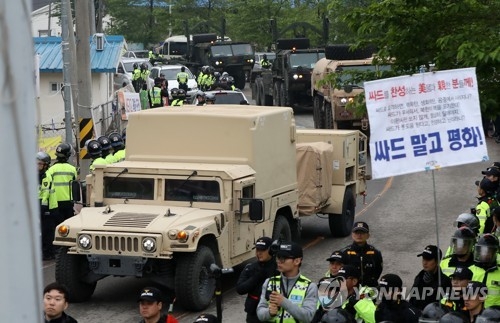