MANILA, Aug. 7 (Yonhap) -- North Korea's foreign minister dismissed South Korea's recent offer for talks as "lacking sincerity" during his brief encounter with Seoul's top diplomat on the sidelines of an Asian security forum in Manila on Sunday, according to a Seoul government source.

Ri was referring to South Korea President Moon Jae-in's offer in July to hold military talks to ease tensions across the border and a Red Cross meeting to resume reunions of families separated by the 1950-53 Korean War. The North has not responded to the overtures.

Ri made the remarks in response to Kang's request for Pyongyang to respond to the offer "as soon as possible," the source said.

"The meeting was not previously arranged but a natural encounter at the party," the source told reporters. "Minister Kang shook hands with Ri before starting to talk."

Whether the top diplomats from South and North Korea will meet during the ASEAN meetings drew keen attention as communication between the two countries remains almost closed amid heightened tensions caused by Pyongyang's repeated nuclear and missile provocations. 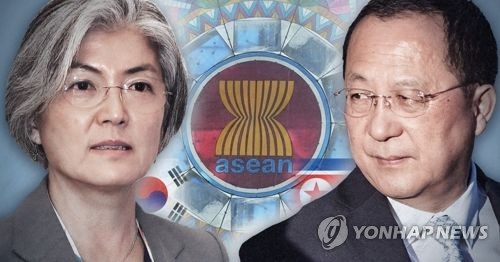 Kang has repeatedly said that she wants to talk to Ri here in any format. A North Korean delegate accompanying Ri earlier said that there are "no such plans."

Kang and Ri will attend the annual ASEAN Regional Forum (ARF) to be held later on Monday where the North's nuclear and missile threats will be high on the agenda. The ARF is a rare regional security forum to which North Korea sends its foreign minister.

Last year, then South Korean Foreign Minister Yun Byung-se had a brief meeting with Ri on the sidelines of the ASEAN meetings in Laos. There was no official discussion or talks between the two ministers at the time.