The North's Strategic Force said that it is "seriously" examining an "enveloping strike" of Guam with four Hwasong-12 missiles and will finalize the plan by mid-August, according to the Korean Central News Agency (KCNA).

Just one day after the North outlined its strike plan, it unveiled details in a tit-for-tat bellicose rhetoric against Washington which says all options are on the table.

The North said that the missiles will cross the sky above the Shimane, Hiroshima and Koichi prefectures of Japan and fly 3,356.7 kilometers for about 18 minutes before landing 30 to 40 km away from Guam.

The plan was devised in a bid to "interdict the enemy forces on major military bases on Guam and to signal a crucial warning to the U.S.," the report said in an English statement. The launches will be upon its leader Kim Jong-un's order.

The North's saber-rattling came as U.S. President Donald Trump warned Tuesday that North Korea will be met with "fire and fury" should it stick to ambitions to hit the U.S. with ballistic missiles.

"Sound dialogue is not possible with such a guy bereft of reason and only absolute force can work on him," Kim Rak-gyom, the commander of the North Korean military unit in charge of missile launches, was quoted as saying by the KCNA. 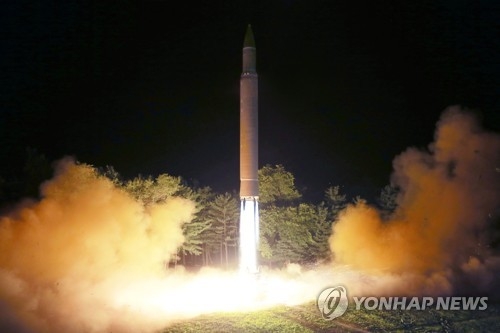 Earlier this week, two B-1B Lancers flew over Korea again in a joint training with South Korean fighter jets. The North has responded sensitively to such a deployment.

Tensions have escalated amid exchanges of inflammatory remarks between Pyongyang and Washington since North Korea's tests of two intercontinental ballistic missiles (ICBMs) in July.

The North vowed Monday to retaliate against Washington in response to the United Nations Security Council's adoption of a new U.S.-led sanctions resolution over its ICBM launches.

On July 4, North Korea fired an ICBM, called the Hwasong-14, followed by another one in late July, which experts say may put much of the U.S. mainland within range, including Los Angeles and Chicago.

South Korea's military warned Thursday that North Korea will pay dearly for possible attacks on the South or its key ally the U.S.

"If the North ignores the warning and provokes, it will face the allies' strong and resolute retaliation," the Joint Chiefs of Staff (JCS) said.

North Korea has been developing nuclear weapons and missiles at an alarming pace with its stated goal of arming itself with a nuclear-tipped ICBM capable of reaching the U.S. mainland.

The U.S. believes that the secretive nation has successfully produced a miniaturized nuclear warhead that can fit on its missile, The Washington Post said Tuesday in a report based on the U.S. intelligence community's assessment.

U.S. Defense Secretary Jim Mattis warned Wednesday that Pyongyang should stop provocations that could lead to "the end of its regime and the destruction of its people."

Experts said that North Korea is likely to continue its bellicose threats as Seoul and Washington will conduct their annual joint military drills starting in late August.

Pyongyang has claimed that the exercise is a rehearsal for invasion despite reassurance by the allies that it is defensive in nature.

North Korea said in June that it can place a moratorium on its nuclear and missile tests if the U.S. suspends the military drills, but Seoul and Washington rejected the idea. 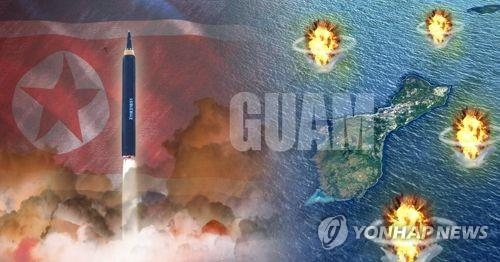