During a general meeting of its lawmakers, the conservative party made the decision to pursue a redispatching of the U.S. arsenal, which was withdrawn as the two Koreas signed a joint declaration for a nuclear-free peninsula in 1991.

Following a spate of North Korean provocations, including long-range missile tests last month, the party has ratcheted up pressure on the liberal government to start discussions with Washington over the redeployment to create a "nuclear balance of power" with Pyongyang.

"The joint declaration for a nuclear-free peninsula has (already) been scrapped by the North, and I believe it has become virtually meaningless for us to hold fast to it," Chung Woo-taik, the party whip, said during the meeting. 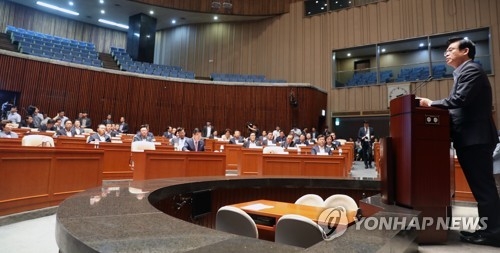 "The time is ripe for us to hold in-depth discussions over the redeployment of the U.S. military's tactical nukes to cope with the dangers of the North's nuclear and missile programs and deter any conflict on the Korean Peninsula," he said.

Tactical nukes refer to short-range nuclear arms designed to be used on a battlefield, as opposed to the strategic nuclear weapons with much higher yields that are delivered by strategic bombers and longer-range ballistic missiles with the aim to eliminate the adversary's will to fight.

The party decision came hours after Woo Won-shik, the floor leader of the ruling Democratic Party, staked a stance against the redeployment, arguing it would amount to recognizing the North as a nuclear power.

During a radio interview, Woo warned that the redeployment could also provoke China and Russia, spark an arms race in Northeast Asia, and thus destabilize the Korean Peninsula.

"If the LKP claims the need for the redeployment, (South Korea) will immediately fall into a case of self-contradiction as it would be like making the North's nuclear-armed status a fait accompli," Woo told local broadcaster CBS.

Woo went on to say that the call for redeployment is a "claim that would benefit the North."

"If we recognize the North as a nuclear-armed state, then it would become a de facto nuclear power. How can we then demand the North's dismantlement of its nuclear program?" he said.