(ATTN: UPDATES throughout with details; ADDS photos)
By Lee Chi-dong and Lee Haye-ah

The missile was fired eastward from the vicinity of Sunan in Pyongyang at around 5:57 a.m., according to South Korea's Joint Chiefs of Staff (JCS).

"It passed through the sky over Japan" and fell into the North Pacific Ocean, the JCS said.

It added the missile flew more than 2,700 kilometers at a maximum altitude of around 550 km. 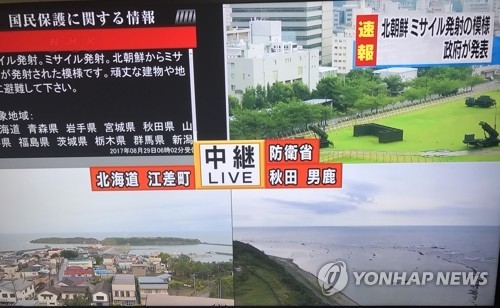 It's quite unusual for the secretive nation to fire a ballistic missile from its capital, another sign that it's diversifying launch areas to dodge external surveillance and a possible pre-emptive strike.

The Pentagon confirmed that the North's missile flew over Japan's territory.

"We are still in the process of assessing this launch. North American Aerospace Defense Command (NORAD) determined the missile launch from North Korea did not pose a threat to North America," Pentagon spokesman Army Col. Rob Manning said in a statement.

It's not the first time that Pyongyang has sent a missile over Japan. The previous case took place in 2009.

Japan's Chief Cabinet Secretary Yoshihide Suga told a press briefing that the missile flew over Cape Erimo on the northern island of Hokkaido before dropping into waters 1,180 km east of the area.

He described it as a serious and grave threat to his country, as the government offered related information via its J-Alert system. 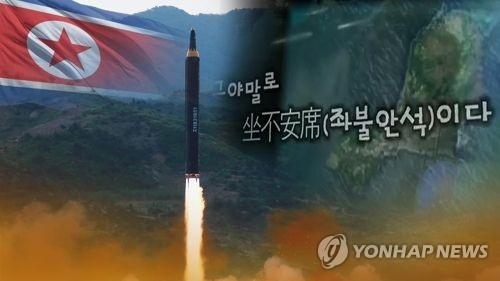 The North's provocation is another slap in the face to Moon and U.S. President Donald Trump as they have sought to resume dialogue.

The latest missile launches marked an end to a monthlong hiatus in the Kim Jong-un regime's provocations, which U.S. officials described as "restraint."

Trump said last week the North's leader "is starting to respect us."

On Sunday, U.S. Secretary of State Rex Tillerson also said despite the North's firing of three short range missiles, "We're going to continue our peaceful pressure campaign, as I have described it, working with allies and working with China as well to see if we can bring the regime in Pyongyang to the negotiating table with a view to begin a dialogue on a different future for the Korean Peninsula and for North Korea."

An annual joint defense exercise between the South Korean and U.S. militaries, called Ulchi Freedom Guardian, is under way on the peninsula. The North has often used the allies' military drills as a pretext for provocations.

Weeks ago, the North threatened to shoot four missiles toward Guam that would travel over three southern Japanese prefectures, but it backed off later, saying it would wait and see the U.S. attitude.

The South's intelligence community said Monday the North appears all set to conduct a nuclear test at its Punggye-ri test site.

The North will celebrate its founding anniversary Sept. 9.