In its report to the National Assembly's defense committee, the ministry also said that its military will stage a unilateral live-fire drill, which involves Taurus air-to-surface guided missiles mounted on its F-15K fighter jets, this month. The missile with a range of 500 kilometers is capable of launching precision strikes on the North's key nuclear and missile facilities.

"We will push for the option of deploying strategic assets such as the U.S. carrier strike group and strategic bombers after consultation with the U.S.," the ministry said.

The show-of-force measures were unveiled a day after Pyongyang conducted what it claims to be a test of a hydrogen bomb mountable onto an intercontinental ballistic missile, sharply raising military tensions.

At the parliamentary session, Defense Minister Song Young-moo said that during his recent talks with U.S. Defense Secretary James Mattis, he demanded that the U.S. deploy its strategic assets to Korea on a "regular" basis. He made the demand, citing local politicians' calls for the redeployment of U.S. tactical nukes.

But he dismissed the news report that he actually demanded the redeployment of the U.S. nuclear arsenal withdrawn from the peninsula in the early 1990s. 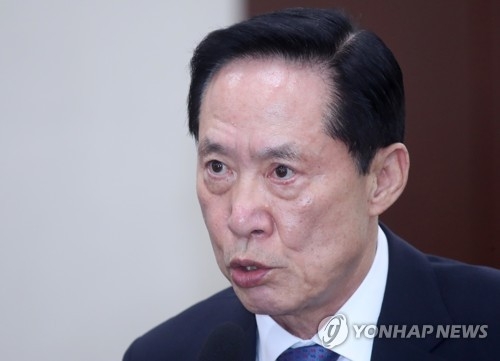 Song, in addition, noted that during a National Security Council session convened shortly after the North's nuke test, top Seoul officials converged on the need to strengthen military measures rather than dialogue with the North in a sign of a possible adjustment to Seoul's rapprochement policy.

"During the NSC session, opinions have coverged towards strengthening the military standoff rather than the Berlin initiative or dialogue," Song said.

The Berlin initiative refers to Moon's policy that pursues Pyongyang's denuclearization with a security guarantee and economic and diplomatic incentives while seeking a peace treaty and dismissing the prospect of forced unification.

In his assessment of Sunday's nuke experiment, Song said that the wayward regime is presumed to have reduced the weight of a nuclear warhead to below 500 kilograms.

In the parliamentary report, the ministry also said that it has continuously detected signs of the North's preparations for ballistic missile launches.

"To show that it has secured a delivery vehicle that can target the United States, the North could launch an ICBM-class ballistic missile," the ministry said.

Referring to the North's sixth nuclear test, the ministry estimated the test's yield at 50 kilotons, much stronger than the previous test last September, which was estimated at 10 kt. One kiloton is equivalent to 1,000 tons of TNT.