SEOUL, Oct. 4 (Yonhap) -- Two clubs that have stumbled into the postseason will clash in South Korean baseball's wild-card game Thursday.

The Dinos, headed to their fourth straight postseason, finished fourth in the regular season at 79-62-3 (wins-losses-ties), five games ahead of the Wyverns (75-68-1), which also reached the wild-card game in 2015. The Dinos won the season series 9-7, including a 5-3 record at Masan Stadium.

This isn't the one-and-done type of competition like wild-card games in Major League Baseball (MLB). The fourth seed has a built-in, one-win advantage and only needs a tie in the first game to get through. The fifth seed must win two straight games on the road to advance.

If the Dinos win or tie Thursday, they'll move on to the next round against the third-seeded Lotte Giants, starting Sunday. If the Wyverns win Thursday, they'll live to play another game Friday, which they also must win to stay alive. In that second game, the Dinos will also need just a tie to advance.

In postseason play, games are declared ties after 15 innings, compared with 12 innings in the regular season. 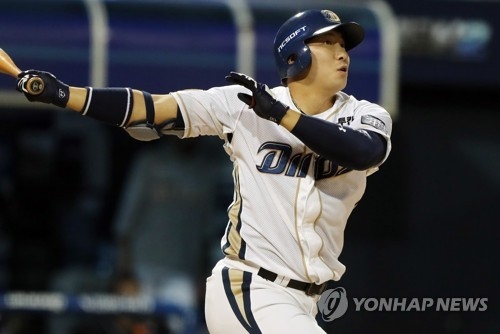 Both clubs struggled in the second half of the 144-game regular season after promising starts.

The Dinos, runners-up to the Doosan Bears last year, were in second place at 48-35-1, albeit eight games back of the Kia Tigers, at the All-Star break. The Wyverns, with first-year manager Trey Hillman at the helm, were 48-39-1 at the end of the first half, good for third place.

The Dinos blew a chance to advance directly to the second round of the playoffs, falling to fourth place after going 12-15 in August and 10-9-1 in September. They dropped out of second place on Aug. 13 and never returned.

The Wyverns opened the second half on a 7-17 slide, before bouncing back to an 11-7 mark in September. They spent two weeks in mid-August in seventh place and didn't climb to fifth place until Sept. 10. 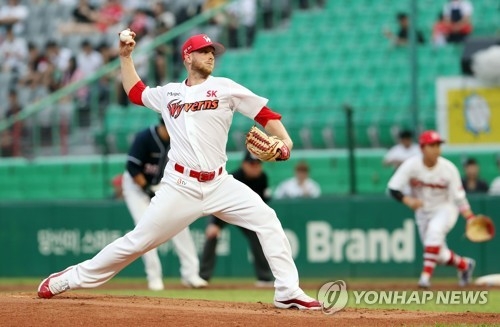 The KBO introduced the wild-card game in 2015. No. 4-ranked teams from the regular season took the wild card in each of the first two years.

Against this backdrop, the Dinos will send right-hander Jeff Manship to the mound. In his first KBO season -- a year removed from pitching in the World Series for the Cleveland Indians -- Manship went 12-4 with a 3.67 ERA in 21 starts. He also set a record by winning his first seven KBO decisions earlier this year.

He faced the Wyverns once on April 7 and held them to three runs -- one unearned -- on five hits in six innings in a 5-3 victory.

The Wyverns will counter with right-hander Merrill Kelly, who went 16-7 with a 3.60 ERA, and led the regular season with 189 strikeouts in 190 innings.

Kelly made one start against the Dinos this year, holding them to two earned runs in six innings in a 13-6 win on June 22.

Sans former MVP-winning slugger Eric Thames, who signed with the Milwaukee Brewers, the Dinos saw their home run total fall from 169 last year (fourth) to 149 (sixth) this year. Despite hitting 85 fewer home runs than the Wyverns, the Dinos scored 25 more runs and had the third-highest team average at .293. 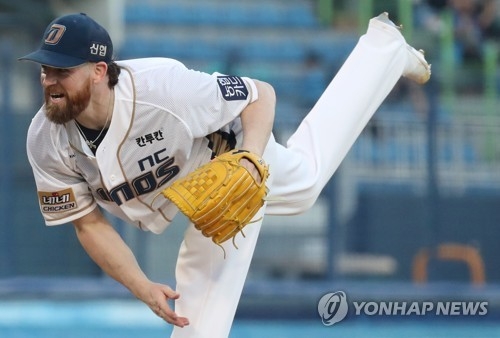 The Wyverns, meanwhile, ranked last with a .271 average as a team. No club had more strikeouts than the Wyverns' 1,100.

But can they mash.

The Wyverns produced nine batters who reached double figures in home runs, including third baseman Choi Jeong, who led the league with a career-high 46 home runs. Jamie Romak, who joined the club in May, smacked 31 home runs in just 102 games, including 12 in 18 September games.

The Wyverns will sorely miss emerging slugger Han Dong-min, who suffered a gruesome, season-ending foot injury while stealing second on Aug. 8, after hitting his 29th home run of the season.

The Dinos have some power sources of their own. Xavier Scruggs, who took Thames' place at first base, nearly matched his production at the plate too, with 35 homers and 111 RBIs in just 115 games.

And Scruggs batted .310 with four homers and 14 RBIs in 13 games against the Wvyerns.

Na batted an impressive .452 -- his highest against any opponent this season -- with two homers and 11 RBIs.

Given the nature of the game, both clubs will have all hands on deck as far as their bullpen usage.

For the season, the Dinos' bullpen posted a 4.32 ERA to rank second, compared with the Wyverns' 5.63. But after September, the Wyverns had a superior ERA with 4.02, while the Dinos' relievers had a 6.35 ERA.

On Tuesday, the final day of the regular season, the Dinos sent 10 pitchers out of their pen in a 12-inning, 8-8 tie against the Hanwha Eagles. 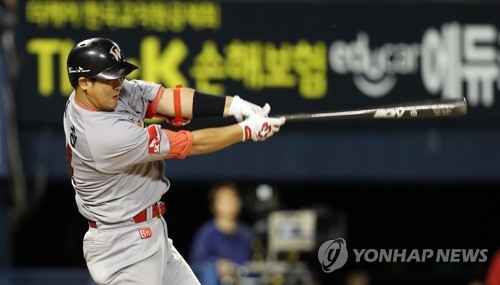