SEOUL, Nov. 17 (Yonhap) -- A North Korean mouthpiece asserted Friday that nuclear issues related to its national interest and people's security can never be put on the negotiating table, in an apparent refusal to a Chinese envoy's anticipated call for the suspension of its nuclear and missile weapons programs.

"The conclusion that our army and people have reached via the history of North Korea-U.S. confrontations is there is no way other than standing against the repressive U.S. imperialists only with a nuclear deterrent of justice," the Rodong Sinmun, a daily of the North's ruling Workers' Party, said in a commentary titled "(U.S) Should Abandon Stupid Ambition."

The commentary came out ahead of an imminent visit to Pyongyang later in the day by Chinese President Xi Jinping's special envoy Song Tao, the head of the international department at the Central Committee of the Communist Party. Beijing said Song will report the outcome of the party's latest congress to Pyongyang.

The visit comes one week after Xi and U.S. President Donald Trump held a summit in Beijing, where Trump urged Xi to use his power to rein in Pyongyang's nuclear weapons program.

On Thursday, Trump evaluated the visit as a "big move."

China also reiterated that the most reasonable way to resolve North Korea's nuclear stalemate is to push for a stop to joint military exercises between South Korea and the U.S. in exchange for freezing Pyongyang's nuclear and missile provocations.

"We've already made clear that we would never take even one step back from a road to beefing up national nuclear power unless the U.S. hostile policy against us comes to an end," the daily said.

Without the complete end of the hostile policy, the North's self-defensive nuclear sword which firmly guarantees its people's rights to sovereignty, survival and development will be further be sharpened, the daily asserted. 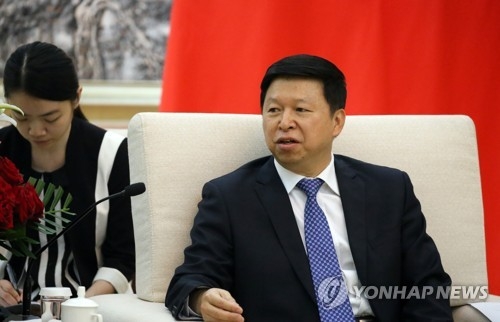