SEOUL, Jan. 19 (Yonhap) -- South Korea's defense authorities said Friday that North Korea will attempt to use its participation in the PyeongChang Winter Olympics to create a crack in the Seoul-Washington alliance, as it's seeking nuclear deterrence against the United States.

The North has already stated the completion of its nuclear force and is likely to demand that the allies halt combined military drills and the rotational deployment of U.S. "strategic assets" to Korea in return for its recent charm offensive, using the upcoming sports event, according to the Ministry of National Defense.

"North Korea will continue to strengthen its nuclear and missile capability to secure war deterrence against the U.S.," it said in a policy report session, presided over by Prime Minister Lee Nak-yon. 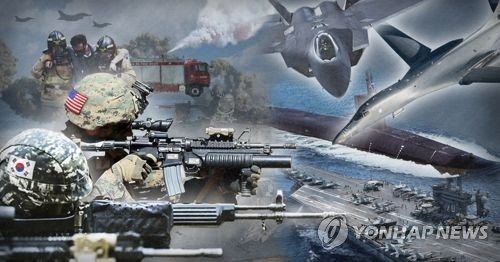 But the international community is expected to tighten sanctions on Pyongyang as part of efforts toward a resolution to the nuclear issue, it added.

"The U.S. and Japan will put maximum pressure on North Korea, mentioning independent sanctions and military options," the ministry said. "China and Russia will likely take such steps as the approval of U.N. Security Council resolutions and the limitation of the oil supply (in case of additional provocations)."