At a hastily scheduled press conference at the national team practice rink, Murray said it's "exciting" to coach the first-ever unified Korean team in any sport at the Olympic Games, though she wished it didn't have to come at the expense of her own players.

"It's exciting to be a part of something that's so historic, to have two countries so divided come together through sports," Murray said at Jincheon National Training Center in Jincheon, 90 kilometers south of Seoul. "I think the story is great and to be a part of it is important. But at the same time, it's mixed feelings because it's at the expense of, 'We don't get to play our full roster.'"

The International Olympic Committee (IOC) announced last Saturday North Korea will have 12 players join the current 23-player South Korean squad for the women's hockey tournament at the PyeongChang Winter Olympics. While staying on as the head coach of the unified team, Murray has to put at least three North Koreans into the lineup. 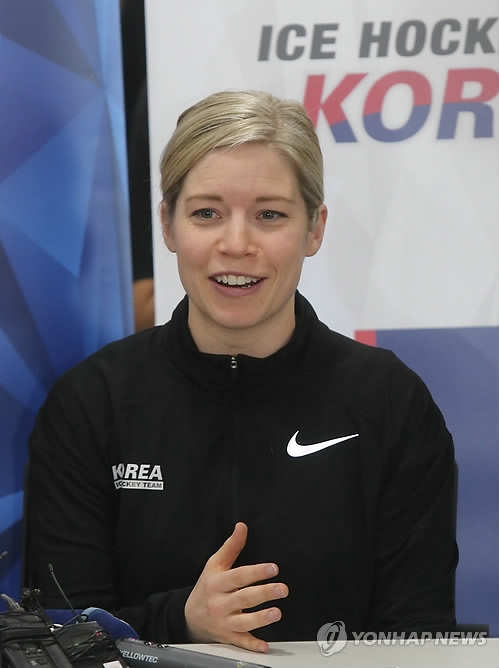 The actual game rosters remained unchanged at 22, with 20 skaters and two goaltenders. Murray would have only needed to leave one player out for each game without the IOC decision. Now, with the start of the Feb. 9-25 Olympics only weeks away, Murray finds herself in a difficult situation of incorporating unfamiliar faces into her system and having to cut four of her own players for each game.

Murray said she doesn't yet know which 12 players from North Korea will come and when, and she added, "I hope they come as soon as possible so we can start practicing right away."

She said she has put together "a ghost roster" that includes North Korean players, and for the time being, they're placed on the fourth line and the last defensive pairing.

"The chemistry on our first, second and third lines is really strong, and the North Koreans' style of play is suited to our fourth line," Murray added. "They're tough, they block shots, and they forecheck. I think they'd fit that role really well."

But that doesn't mean they'll be stuck there at the Olympics.

"If they work hard and they earn their ice time, and one of our players chooses not to work hard, then who knows what can happen?" Murray said.

When she first learned of the IOC's decision, Murray said she was concerned more about how many of her own players wouldn't dress, rather than how many North Koreans would be added.

"When you find out any number of players aren't going to dress for your team, it's not great news," she said. "Of the possible solutions to the problem or different scenarios they gave us, having three (North Korean) players was one of the better solutions. We're happy we're not having to dress as many as 12 players. We're just moving forward and dealing with the situation that's been given us."

Asked if she was wary of any pressure from political circles to play all North Koreans at least once, Murray said she's been assured she has "the ultimate control."

"As far as I know, I have complete control and I am going to play the players I want," she added.

South Korea suggested forming the joint team on Jan. 9 and the two sides agreed on it last Wednesday. South Korean Sports Minister Do Jong-hwan first raised the possibility of a single Korean hockey team last June. It appeared to fade away in the face of some criticism, but resurfaced at the start of the new year, after North Korean leader Kim Jong-un said he'd send his athletes to PyeongChang for the Olympics. 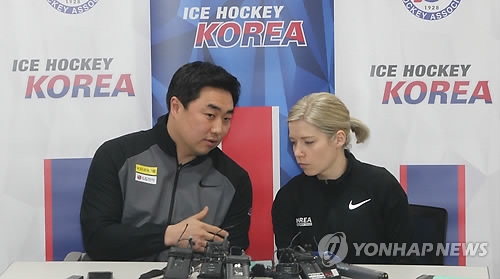 The subsequent inter-Korean meetings on the North's participation had the hockey team issue on their agenda, and it didn't take long for the IOC to give its stamp of approval.

South Korea has faced some backlash at home for its push to bring North Korean players on board. Critics of the idea say South Korean players will unfairly lose their playing opportunity and that the government is only using the sport of hockey as a political tool. Supporters of the move say having a few players sit out games is a relatively minor issue when considering the greater good -- namely, peace on the Korean Peninsula -- it could achieve.

Murray said she wasn't "really that angry" about how things have led to the joint team and how much she'd been kept in dark, because getting upset was a waste of energy.

"We don't have a lot of days leading up to the Olympics, and we can't waste any extra energy being angry," she said.

Murray also said the timing for the joint team "isn't fantastic" because the Olympic Games are just around the corner, but she has called on her players to focus on what they can control and not get sidetracked by anything else.

"It's a tough situation to have our team be used for political reasons, but it's something that's bigger than ourselves right now," she said. "We're dealing with it the best we can. We know we have no control. Why stress about it? Why worry about it? It's negative energy."

The sport of hockey has never been discussed with as much fervor in the country. And Murray said one positive that can come out of this situation is that hockey will generate much interest in the sport.

"So many young athletes are going to see us and get interested, and adding North Koreans gives our sport more publicity," she said. "Hopefully, more people are going to watch and we'll have more female athletes competing in the Olympics in the future."