UIJEONGBU, South Korea, Jan. 27 (Yonhap) -- Bird flu has been detected at a chicken farm in a city in southern Gyeonggi Province, the agriculture ministry said Saturday, in the latest in a series of discoveries of the highly pathogenic virus in poultry farms around the country.

Bird flu was found at a farm with some 147,700 layer chickens, in Hwaseong, about 43 kilometers southwest of Seoul, where birds tested positive for the H5N6 strain of avian influenza (AI), according to the Ministry of Agriculture, Food and Rural Affairs. The ministry conducted tests in all poultry farms in the region and imposed a temporary ban on the distribution of any poultry products in traditional markets. Anyone who works at the farm will be quarantined for the next seven days, the ministry added.

The government will release its final test results on Sunday over whether the new AI case reported on a chicken farm in Pyeongtaek, another city in Gyeonggi Province, is also highly pathogenic.

A 24-hour standstill order on poultry, equipment and livestock breeders has been in effect since late Friday.

Quarantine officials have culled 145,000 chickens as part of preventive measures. They plan to slaughter another 200,000 from two other farms located within a 500-meter radius.

Since the first outbreak of highly pathogenic AI in November, South Korea has confirmed 11 bird flu cases and culled 1.46 million ducks and chickens. The majority of outbreaks occurred in Jeolla Province in the country's southwest, a major duck farming region. 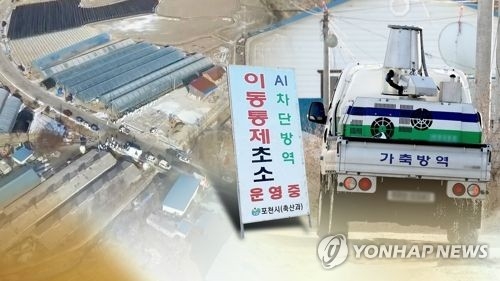