WASHINGTON, Feb. 14 (Yonhap) -- North Korean leader Kim Jong-un has been reaching out to South Korea out of fear the United States will launch a preventative strike on his country, a North Korean defector who worked for the regime said Wednesday.

Ri Jong-ho, a former ruling party official, was referring to Kim's recent willingness to engage with South Korea over his country's participation in the PyeongChang Winter Olympics. Last week the North Korean leader sent his smiling younger sister, Yo-jong, to attend the opening ceremony of the Games and invite South Korean President Moon Jae-in to Pyongyang.

"Kim Jong-un is afraid that the U.S. will launch a preventative strike, and he is trying to buy time to complete his nuclear and missile programs," said Ri, who worked for three decades in Office 39 of the North's ruling Workers' Party. The office is responsible for raising funds for Kim.

The defector spoke at a forum in Washington amid growing speculation about whether the current thaw in inter-Korean ties will lead to broader talks between the U.S. and North Korea on the regime's denuclearization. 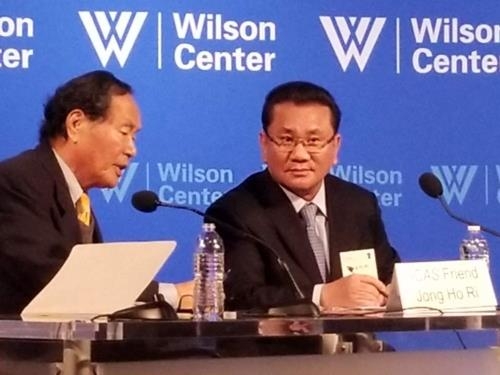 "Kim Jong-un is struggling under the strongest-yet sanctions and military and diplomatic pressure, so he is trying to improve the situation by putting on a false front," Ri said.

Allegations that sanctions are having no impact on the regime are untrue because the measures of the past year are the toughest in 25 years, and Kim is trying to "create a hole" in that sanctions regime, he added.

Ri defected to South Korea in 2014 while running the Dalian, China, branch of a North Korean trading company. In 2016, he resettled in the U.S. state of Virginia.

"Depending on the circumstances, North Korea could hold South Koreans hostage and continue its threatening provocations," he claimed.

Citing Pyongyang's track record of extracting money from Seoul in return for progress in inter-Korean ties, Ri also alleged that the two sides struck a similar underhand deal this time.

He praised U.S. President Donald Trump's recent efforts to highlight human rights abuses by the Pyongyang regime, saying the issue is a powerful "weapon" against Kim and the most effective means to resolve the North Korean standoff.