SEOUL, March 4 (Yonhap) -- South Korea will hold a cultural festival with "hallyu," or Korean Wave, stars for domestic and foreign tourists as part of its efforts to promote the PyeongChang Paralympics, which are set to kick off later this week, the country's tourism promotion agency said Sunday.

Snow Festival in March will begin Friday with actor Jang Keun-suk's two-day meeting with fans, according to the Korea Tourism Organization (KTO).

Jang will provide 2,018 tickets to his fans to watch an ice hockey event together in Gangneung, a sub-host city of the March 9-18 games located some 230 kilometers east of Seoul, on the second day, the KTO said.

On March 13, actor Lee Dong-wook is set to hold a fan meeting in the city and watch an ice hockey game together with 1,000 fans he bought tickets for, it said.

Other music concerts are also planned for visitors, including a K-pop performance on March 15 featuring various artists, including B1A4 and BTOB, the KTO said.

South Korea has been gearing up for the success of the Paralympic Games in PyeongChang and its adjacent cities, where the quadrennial Winter Olympics recently wrapped up.

Local organizers of the Paralympic Games have said the upcoming event will be the largest of its kind in history, with 570 athletes from 49 countries expected to take part.

They also include two North Korean athletes who will mark the communist state's first appearance in the Paralympics. 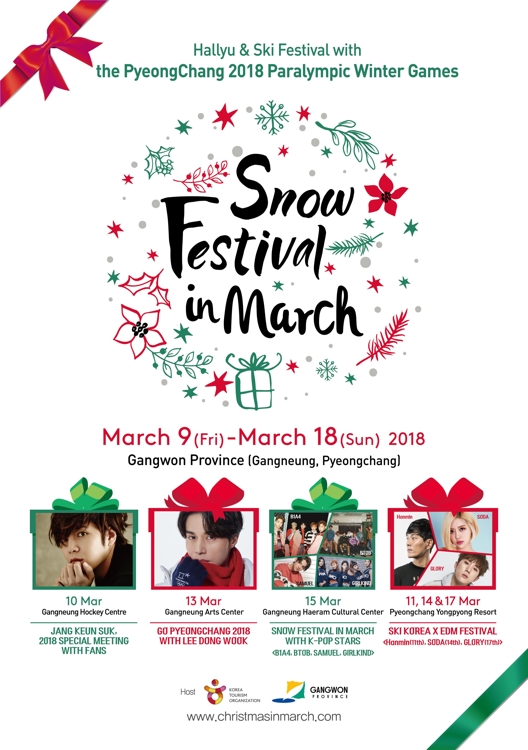