SEOUL, April 27 (Yonhap) -- The two Koreas have agreed to jointly participate in international sports competitions, including the 2018 Asian Games, following their historic summit on Friday, raising expectations of unified teams at upcoming events.

The agreement was part of a joint declaration issued after South Korean President Moon Jae-in and North Korean leader Kim Jong-un held their monumental summit earlier in the day at the truce village of Panmunjom.

According to the statement, the two Koreas agreed to compete together in international sporting competitions, including the 2018 Asian Games, scheduled for Aug. 18-Sept. 2 in Jakarta and Palembang, Indonesia. The statement said such moves would show Koreas' wisdom, talent and unified efforts to the world.

The two Koreas recently shared moments of unity at the PyeongChang Winter Olympic and Paralympic Games in the South earlier this year. At the 2018 Winter Olympics, South Korea and North Korea formed a unified team in women's ice hockey and marched in together behind the Korean Unification Flag at the opening ceremony.

With the latest announcement, the two Koreas are expected to engage in more sports exchanges and make efforts to field single teams at international competitions.

The women's hockey squad at PyeongChang 2018 was the first unified Korean team at any multisport competition. The Koreas have yet to field a joint team in a summer sport at the Olympics or Asian Games.

They did compete as a single team at the 1991 World Table Tennis Championships in Japan and at the FIFA World Youth Championship in Portugal in the same year.

Even before the two leaders' announcement, South Korea had been pushing for a unified team with North Korea at the Jakarta-Palembang Asian Games.

The Ministry of Culture, Sports and Tourism in Seoul recently asked 40 national sports federations whether they would be willing to form a unified team with North Koreans at the 2018 Jakarta-Palembang Asian Games.

Local experts, however, said there are still steps to take for the two Koreas to compete under one flag, even if South Korean national sports bodies have expressed their interest. They will first have to get permission from international federations for the possible expansion of entries and will also need to have their athletes on board.

The South Korean government faced some backlash when it pushed ahead with the joint women's hockey team only weeks before PyeongChang 2018 without prior consultation with the sport's national federation or South Korean players. 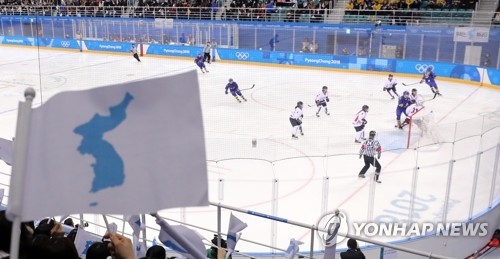 Slammed by pandemic, small business owners live off debt -- until they can't