SEOUL, July 27 (Yonhap) -- The executive chief of South Korea's largest Buddhist order is facing growing calls to step down over a series of scandals involving embezzlement and corruption.

Ven. Seoljeong, the executive chief of the Jogye Order of Korean Buddhism, is expected to announce his stance about the resignation demand as early as Friday.

The 76-year-old has been dogged by a string of allegations of misusing and embezzling the sect's public funds and secretly fathering a daughter, despite publicly identifying as a celibate Buddhist monk.

Rev. Seoljo, a reform-minded senior monk, is on a hunger strike demanding Ven. Seoljeong's resignation. The hunger strike reached its 38th day on Friday, supported by civic groups and rank and file members of the Jogye order.

The executive chief had planned a public announcement on the issue last Friday, but canceled it, citing an internal division of opinion.

"The executive body finds it difficult to contain the situation any longer as protests spread even more over time," an official at the order said. "(He) may announce his response in the near future."

A nationwide association of Buddhist monks was scheduled to stage a prostration protest at the Jogye headquarter temple in central Seoul. Associations of Buddhist nuns and college students have also joined the protest. 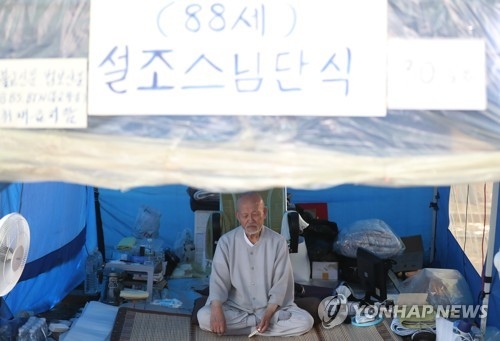