SEOUL, Aug. 16 (Yonhap) -- The Central Council of South Korea's biggest Buddhist sect, Jogye Order, voted Thursday to oust its executive chief, who has refused to step down despite a series of corruption scandals.

A total of 56 of the legislative organ's 75 members voted in favor of a proposed bill to oust Ven. Seoljeong in a meeting held in the morning. Fourteen others voted in opposition and four abstained while the remaining one vote was counted as undervote.

The decision will become final if it is approved during a meeting of the order's senior members, set for Aug. 22.

The council's first-ever passage of a vote of no-confidence for the order's executive chief came after the 76-year-old monk on Monday vowed to retain his current position despite growing calls for resignation from rank-and-file order members and civic groups.

Seoljeong has been facing a string of allegations that he forged his academic credentials, illegally owned vast real estate holdings and secretly fathered a daughter against the sect's celibacy rule.

He took office in November last year as the chief executive officer of the Jogye Order for a four-year term. 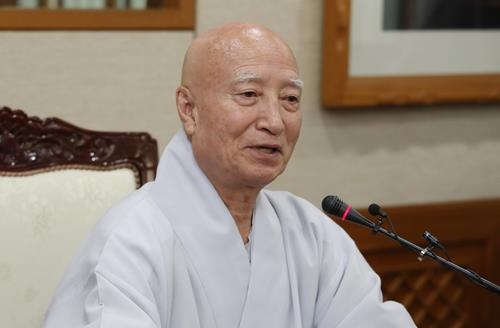