"I came forward to this religious sect to bring changes to the flawed Korean Buddhism but will have to return to the mountain having failed to fulfill my will," Ven. Seoljeong said during a press conference in central Seoul.

The 76-year-old monk then left for Sudeok Temple in Yesan, South Chungcheong Province, where he will spend the rest of his life, after briefly visiting the order's headquarters at the Jogye Temple in central Seoul to bid farewell to the believers and officials there.

Seoljeong has been facing a string of allegations that he forged his academic credentials, illegally owned vast real estate holdings and secretly fathered a daughter against the sect's celibacy rule. But he had refused to step down despite growing calls for his resignation from rank-and-file order members and civic groups.

During the press conference, he again dismissed most of the allegations as "groundless" while criticizing those opposing the reform.

"If there was such a thing, I would not be here," he said. "As the executive chief of the Jogye Order, I wanted to achieve what I couldn't make happen in the 1994 reform, but a few politically connected monks are thoroughly hindering the effort ... We need to change the perception of the faithful to make it a religious group led by monks and believers."

The resignation came about a week after the order's Central Council voted in favor of a bill to oust him. The order's senior members will meet Wednesday to approve his resignation.

If the decision becomes final in the meeting, the order is required to elect a new executive chief within 60 days. Seoljeong's deputy, Ven. Jinwoo, will work as acting chief until the election is over.

Seoljeong took office in November last year as the chief of the Jogye Order for a four-year term. 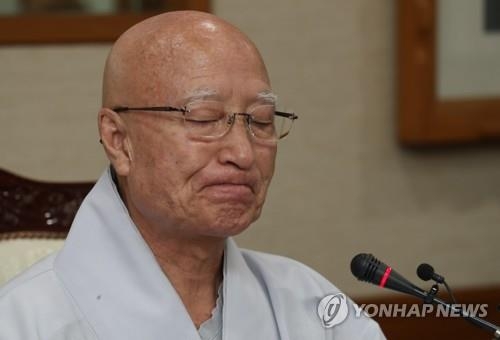