SEOUL, Oct. 29 (Yonhap) -- North Korea is unwilling to provide a list detailing its nuclear facilities and materials as long as the United States holds on to a policy of hostility towards Pyongyang, a security adviser to President Moon Jae-in said Monday, citing a top North Korean official.

Moon Chung-in, a special presidential adviser for unification, diplomacy and national security affairs, said that he recently heard a top-ranking North Korean official expressing reluctance to comply with the U.S. demand that the North submit a list of nuclear sites and accept an international nuclear inspection prior to a declaration to end the Korean War. 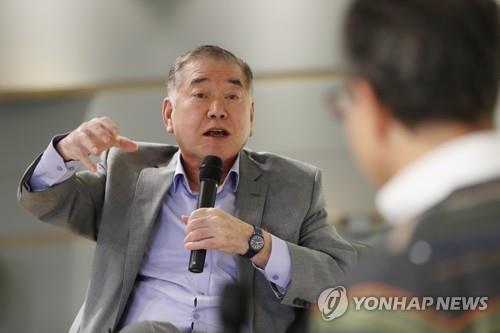 Disclosing the remarks by an unidentified Pyongyang official during a forum on Korean Peninsula peace in Seoul, the adviser called for a flexible stance, instead of a rigid and one-sided approach, in negotiations with North Korea.

"On my recent trip to Pyongyang, I said to a high-ranking North Korean official that the North can build trust with the U.S. after providing its nuclear program list, accepting international nuclear inspection and signing an end-of-war declaration," Moon said.

"But the North's position was clear. The official told me his country cannot present a list of nuclear facilities and materials due to hostility from the U.S.," Moon said.

The adviser accompanied President Moon on his trip to Pyongyang on Sept. 18-20 for his third summit with North Korean leader Kim Jong-un.

He said the U.S. approach to the North Korean nuclear problem, which seems based on the principle of collective agreement, is considered inflexible and even idealistic.

"I agree to complete, verifiable and irreversible denuclearization and that's certainly our goal. But if we adhere to this unpractical approach, the consequences are tragic and we should avoid such a situation from the beginning," said Moon.

The adviser said he concurs with the North's position that an end-of-war declaration and a non-aggression treaty should be signed ahead of the provision of the nuclear program list and an international nuclear inspection.

He then advised the U.S. not to view North Korea as "wicked" in order to deal flexibly with the North.