SEJONG, March 12 (Yonhap) -- The top Australian envoy to South Korea on Tuesday called for close cooperation on building up the hydrogen economy, the finance ministry said.

James Choi made the comments in a meeting with Lee Ho-seung, the first vice minister of economy and finance, in central Seoul.

Canberra has been pushing for a project to produce hydrogen from Australian brown coal for export to Japan.

South Korea has been seeking to boost the hydrogen economy as a new growth engine.

In January, South Korea said it will increase the number of hydrogen fuel cell electric vehicles to about 80,000 units by 2022 as part of a broader effort to give a boost to the hydrogen economy.

A hydrogen fuel cell electric car only releases water vapor as it converts stored hydrogen into electricity to turn the drive motor.

Global carmakers have been racing to go eco-friendly amid tightened regulations on emissions of greenhouse gases, which scientists say are to blame for global warming.

The Pacific trade pact -- which went in effect in December -- aims to slash tariffs on goods to stimulate trade among Japan, Canada and nine other countries.

Hong Nam-ki, the minister of economy and finance, has said South Korea will hold preliminary unofficial talks with major countries of the Pacific trade pact to better cope with uncertainties in global trade, though he said discussions do not necessarily mean the country will join the open trade agreement.

South Korea has clinched a series of free trade deals with major trading partners, including the United States, the European Union and China, as well as Chile, Peru and Colombia, in recent years as part of its efforts to boost growth in the country's export-driven economy. 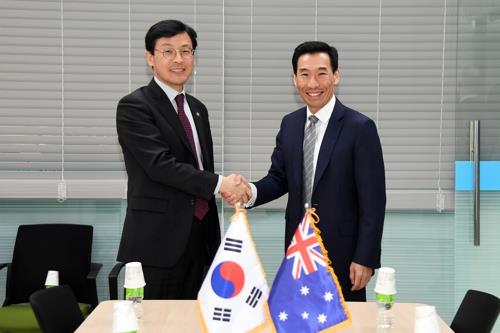