SEOUL, May 26 (Yonhap) -- U.S. President Donald Trump said Sunday that he is not disturbed by the latest missile launches by North Korea and still has confidence that the country's leader Kim Jong-un will keep his denuclearization promise.

"North Korea fired off some small weapons, which disturbed some of my people, and others, but not me," Trump tweeted while on a state visit to Japan.

"I have confidence that Chairman Kim will keep his promise to me," he said.

North Korea carried out two firings into the East Sea over a less than one-week period early this month, including two short-range missiles, in an apparent show of frustration over the stalled denuclearization talks with the U.S.

There have been inconsistent assessments from Seoul and Washington over how to classify the missile firings. While the South Korean military has yet to officially define the missile types, Pentagon earlier called them ballistic missiles banned under the UNSC resolutions.

During a press conference in Tokyo on Saturday, U.S. National Security Advisor John Bolton said that there was "no doubt" the missile tests violated UNSC resolutions, though he said the U.S. remains willing to hold talks with North Korea and that it's up to its leader, Kim Jong-un, to "walk through" that door.

Tensions have risen after the U.S. government said it seized a North Korean cargo ship on suspicion of shipping coal and other goods in violation of U.N. and U.S. sanctions on the regime.

North Korea's foreign ministry on Friday blamed Washington for the failure of the Hanoi summit and urged the U.S. to change its negotiation approach with "a new method of calculation" if it wants to keep the dialogue alive.

Trump is set to visit South Korea late next month as part of his trip to Asia to discuss the denuclearization of North Korea and alliance issues with South Korean President Moon Jae-in.

At a campaign launch in Philadelphia a week earlier, Biden slammed Kim and Russian President Vladimir Putin "dictators and tyrants." 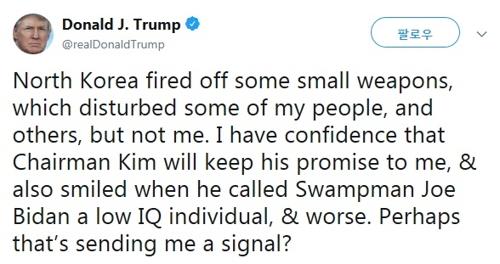