SEOUL, June 17 (Yonhap) -- On the first day of K-pop sensation BTS' first-ever fan event and concert in Busan this weekend, a number of people were blocked from entering the venue although they had tickets in their hands.

Officials from Big Hit Entertainment, the management agency of BTS, demanded buyer information on the tickets match the ticket holder's identity documents at the event Saturday.

Teenage fans who bought tickets using their parents' names were turned down, while students who brought copies of their student ID cards instead of the actual IDs were not accepted either. 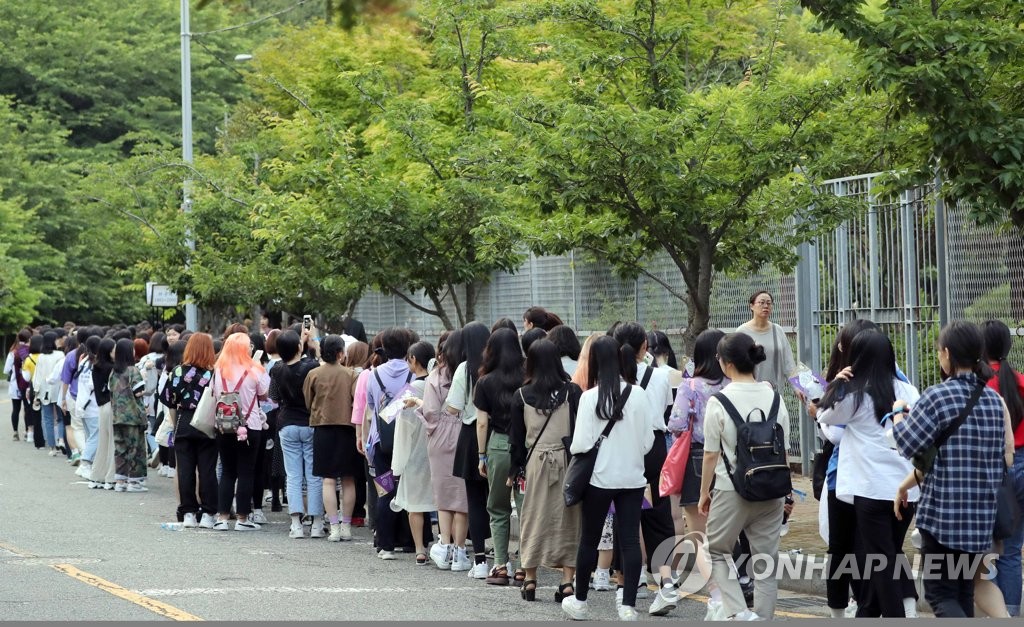 Big Hit said it has already posted an announcement on ticket purchasing sites, the BTS' fan cafe and social media that it would undergo tighter identification checks, before opening online ticketing of the Busan concerts.

Although fans and their parents kept complaining of the stricter-than-expected practice on the second day of the concerts Sunday, the company did not budge an inch and remained adamant about the ticket-ID matching requirements.

Insiders said it is part of the K-pop industry's efforts to prevent rampant ticket scalping in South Korea.

As popularity of K-pop stars led by BTS has been flying high, fans have to go through fierce competition to get tickets for concerts by their most beloved K-pop idols.

Buying tickets for high-profile performances is so competitive that the media and online ticket buyers call the experience "piketing," a portmanteau of the Korean word for "bloody" with "ticketing."

At the same time, ticket brokers scoop up tickets with macro programs and sell them through social media and online communities at a huge premium, although such ticket reselling is illegal in South Korea.

After losing the competition to book seats at the most-anticipated concert, K-pop fans, many of whom are young students, have to resort to the black market and pay huge premiums to acquire them.

For example, prices of tickets of concerts by the now-disbanded boy group, Wanna One, at Seoul's Gocheok Sky Dome in January were around 100,000 won (US$84), but they were resold for prices of 1 million won or more.

"Parents who bought tickets for their children might feel it was unfair. But the agency has already noticed it, and there's no exception," said an unnamed official from a management firm. "This time, Big Hit's handling will probably arouse awareness about ticket scalping."

BTS will hold its second round of "Muster" fan meetings in Seoul this coming weekend, with the same watertight ID screening announced.