Xi is scheduled to pay a two-day visit to North Korea from Thursday at the invitation of its leader Kim Jong-un, according to the Korean Central News Agency (KCNA).

It will be the first visit by a Chinese leader to its communist neighbor in 14 years. Though Xi visited North Korea in 2008, he was China's vice president at that time.

Back in January, the KCNA reported that Xi accepted Kim's invitation to visit North Korea "at a convenient time" during their summit in Beijing.

Other details on Xi's visit to North Korea were not available. 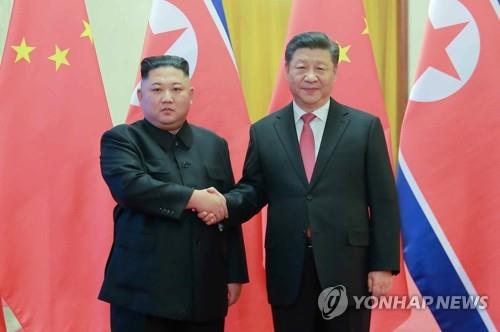 The two leaders last met in January this year when Kim visited China ahead of his second summit with U.S. President Donald Trump.

As North Korea's last remaining major ally and a key provider of economic support, China has sought a role in negotiations on the North's nuclear programs.

Talks between Washington and Pyongyang have been stalled since February as the Trump-Kim summit in Hanoi broke down due to their failure to narrow gaps over the scope of Pyongyang's denuclearization and Washington's sanctions relief.

But there have been a flurry of conciliatory feelers from North Korea, as well as the U.S. and South Korea, in recent days, reigniting hopes for the resumption of nuclear talks.

Last week, Trump said that he received a "beautiful" letter from Kim, the first known correspondence since their no-deal Hanoi summit. He also mentioned the likelihood of another summit with Kim.

In response to Xi's planned visit to North Korea, South Korea's presidential office Cheong Wa Dae expressed hope for its contribution to a peaceful resolution to Korean Peninsula issues, including the swift resumption of nuclear negotiations.

The planned visit comes a week before the G-20 summit slated for June 28-29 in Japan, where Xi is widely expected to meet with Trump.

"Ahead of a possible third summit between Trump and Kim, Xi appears to feel the need to meet with Kim to play a role in denuclearization negotiations," Lee Hee-ok, chief of Sungkyun Institute of China Studies, said.

Other analysts also said China may attempt to use North Korea as leverage in its talks with the U.S. on key pending issues. The two giants have been in a prolonged trade war and at odds over South China Sea issues.

Xi's planned visit to the North highlighted the improved ties of the two communist neighbors. This year marked the 70th anniversary of their diplomatic ties.

Relations between the Pyongyang and Beijing frayed in the early years of Kim's rule, as the North forged ahead with a string of nuclear and missile tests in disregard of Chinese warnings.

In an apparent snub of Kim, Xi broke from decades of tradition and visited South Korea first without visiting the North. No Chinese president had ever done that before.

But their ties have marked a turnaround since last year, as Kim launched a peace offensive to the outside world. Since 2018, Kim has visited China four times.