During the 15-minute talks with U.S. Secretary of State Mike Pompeo on Wednesday night, Foreign Minister Kang Kyung-wha voiced concerns over Japan's restrictions on the exports of key high-tech materials to South Korea.

"Minister Kang said that given that Japan's trade restriction step could cause damage to our companies and have a negative impact on the world trade order, as well as on U.S. firms, by disrupting the global supply system, it is undesirable in terms of the friendly cooperative relationship between South Korea and Japan and of trilateral cooperation among the South, the U.S. and Japan," the ministry said in a press release. 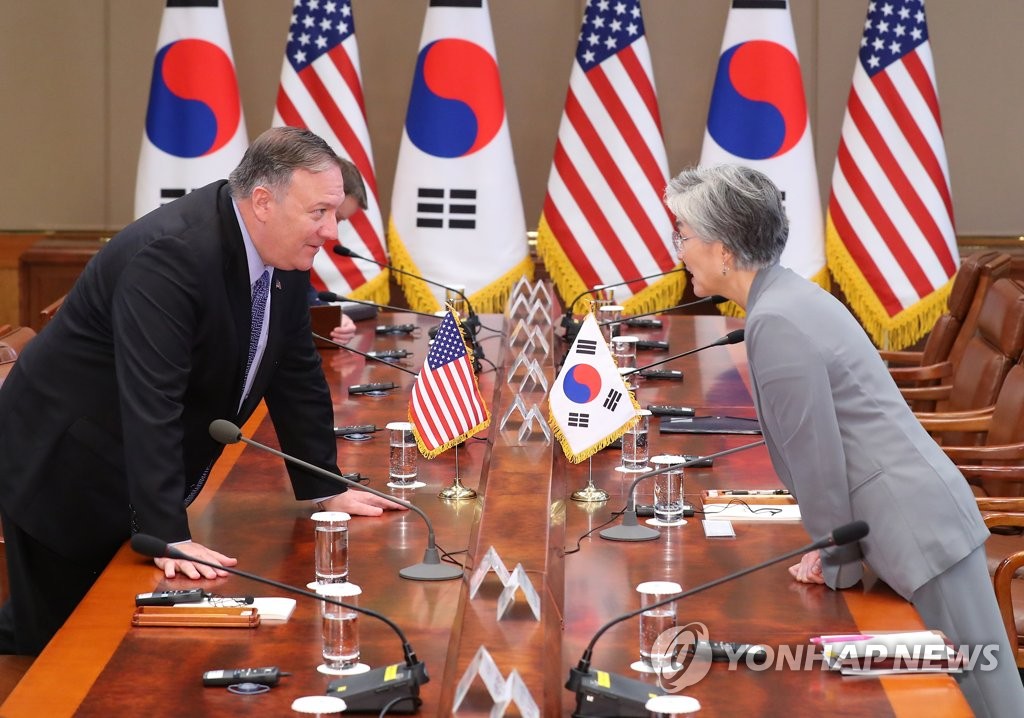 Kang, who is on a visit to Ethiopia, also noted Seoul's hope to explore a diplomatic solution to the issue through dialogue with Tokyo.

Pompeo expressed his "understanding" of Seoul's position, the ministry said, as the two sides agreed to continue cooperation in strengthening diplomatic communication between South Korea and the U.S. and trilaterally among the South, the U.S. and Japan.

Their talks came amid growing calls for Washington to step in to defuse tensions between its two core Asian allies that could pose a hurdle in its drive to strengthen the regional alliance network to promote stability in the Indo-Pacific region.

Japan has protested the South Korean court rulings that ordered Japanese firms to compensate victims of forced labor. It argues that all reparation issues stemming from its 1910-45 colonization of the peninsula were settled under a 1965 government-to-government accord aimed at normalizing bilateral ties.

South Korea has refused to intercede in the civil litigation, saying it honors the democratic constitutional principle that guarantees the separation of the executive, legislative and judicial powers.

With no sign of Japan moving to compromise, Seoul has been trying to drum up international support to reverse the export restrictions based on its claim that what it sees as a politically driven measure runs counter to free trade principles.

Also during Wednesday's phone talks, Kang and Pompeo agreed to continue close communication to achieve the shared goal of the complete denuclearization and a lasting peace on the peninsula, the ministry said.

In addition, they agreed to continue their dialogue on the sidelines of a regional forum set to open in Thailand early August.

In a separate press release, the U.S. State Department said the two "reaffirmed their commitment to the final, fully verified denuclearization of the DPRK, the importance of U.S.-Japan-ROK trilateral cooperation, and agreed to continue working closely together to address common challenges in the Indo-Pacific."

"Secretary Pompeo and Foreign Minister Kang also discussed the enduring strength of the United States–ROK alliance, which remains the linchpin of peace and security on the Korean Peninsula and in the region," the department said.