WASHINGTON, July 11 (Yonhap) -- The United States has offered to hold trilateral high-level talks with South Korea and Japan to resolve a growing trade spat between the Asian nations, but Tokyo has yet to respond, a top South Korean presidential official said Thursday. 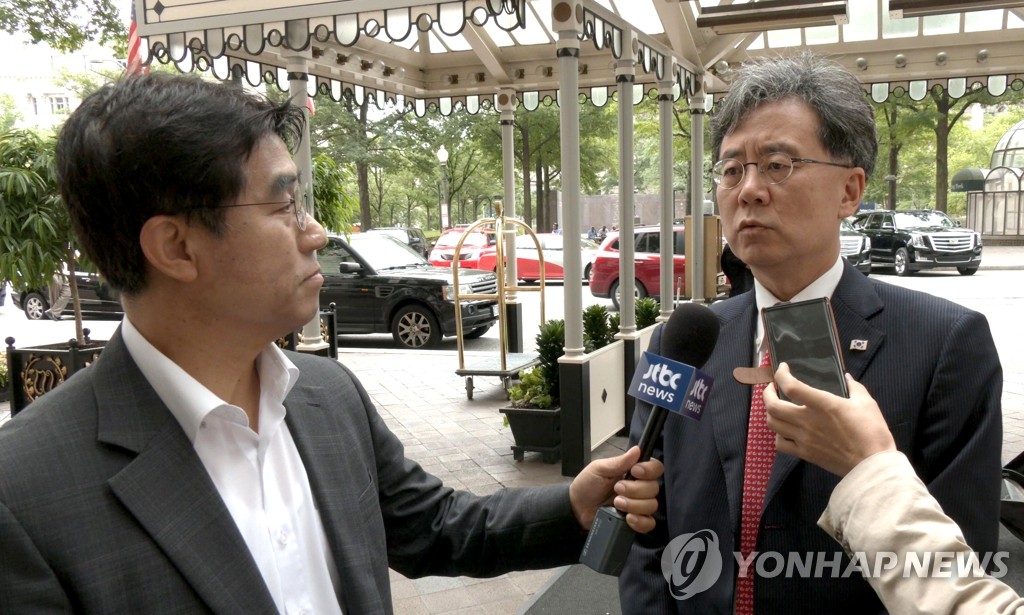 "We would like to seek a constructive solution, but the Japanese side still hasn't responded," Kim told reporters outside his hotel in Washington, where he has been meeting with White House officials and members of Congress to raise awareness of South Korea's position in the dispute.

"A high-level American official will be traveling to Asia, so the U.S. wanted to use the opportunity to have a three-way meeting, but while South Korea and the U.S. are very eager, the Japanese side appears to be a bit passive," he later elaborated before heading to a meeting with U.S. Trade Representative Robert Lighthizer.

When asked, he declined to say whether the U.S. official is David Stilwell, the top U.S. diplomat for East Asia who is due to visit South Korea and Japan in the coming days.

South Korea has raised the case at the World Trade Organization and sought to explain the move's damaging effects on not only the South Korean economy but also the U.S. and world economies.

Lighthizer said he would inform Kim if there is any way in which the U.S. can help resolve the issue, the South Korean official told reporters after their meeting.

On Wednesday, Kim held talks with acting White House chief of staff Mick Mulvaney, as well as with members of the Senate.

Mulvaney expressed hope that the two U.S. allies will be able to resolve the dispute in a constructive manner, according to Kim.

The senators he met also voiced similar opinions, he said.

He said the two will discuss a wide range of issues, including negotiations over North Korea's nuclear weapons program and what the U.S. aims to achieve as the end state.

The U.S. and North Korea are expected to resume talks in the middle of this month in line with an agreement between U.S. President Donald Trump and North Korean leader Kim Jong-un during their meeting at the inter-Korean border on June 30.

"I can't say for certain whether they will be held next week or the week after," the South Korean official said. "We're still waiting for a response, so I think we'll have to wait and see."

"We had sufficient discussions on the problems that will be caused by Japan's strengthening of export controls, and I think it was an opportunity for the U.S. to fully understand that," he told reporters. "The U.S. side is fully aware of the issue and understands the seriousness of it."

South Korean Trade Minister Yoo Myung-hee is expected to visit the U.S. next week to continue discussions on the issue.