SEOUL, July 15 (Yonhap) -- While working at a community center in Seoul's central Yongsan district as part of alternate military service five years ago, Cho Yong-min overheard conversations between the elderly who had regularly visited the facility to take classes like calligraphy, billiards and dancing.

Invited to join the talks, he was surprised to find out that these seniors were plagued by one common issue: estranged ties with younger people.

"These people were so-called 'educated' people. A former school headmaster and a retired senior official from the Financial Supervisory Service ... and they were afraid to talk with their grandkids. They came to the center because they had nowhere else to go," the 28-year-old said in a recent interview with Yonhap News Agency.

"That's when I started to think of ways that could perhaps help break down the wall between them and provide seniors with a stage where they could talk with younger people," he said.

That motivated Cho and his two other close friends to get together and develop SAY, an online one-on-one Korean tutoring platform.

SAY, or "Seniors and Youth," is a video chat-based learning tool that matches a Korean native tutor with a foreigner. Notable is that all SAY tutors are retired seniors aged between their late 50s and early 70s, with long career backgrounds in various fields.

"We figured that the young seniors had so much experience and still wanted to be of help to the society but had little chance," said Cho Yeon-jeong, CEO of Say Global Inc., which operates SAY.

The two young entrepreneurs contacted the Korean language school at Princeton University, their alma mater, and test-ran the program for students in America. After positive reception, SAY was officially launched in 2017.

Cho Yong-min is currently the operations director in charge of tutor management. Nguyen Quan, a Vietnamese-American and old friend of Yongmin, is another co-founder of SAY who heads the marketing.

South Korea officially became an aged society in 2017, meaning that over 14 percent of its population are aged 65 or older. Roughly 1 in every 4 South Koreans are in their 50s or 60s, dubbed baby boomers.

Those in these age groups were considered the driving force behind the country's robust economic growth in the 1970s-80s and hard-working parents who worked to give the best to their families.

But upon entering the retirement phase, they are left to adjust to a new life with a growing sense of alienation and increasing job insecurity.

Separate data by a local think tank found that 3.44 million retirees or unemployed aged over 60 said they were looking for a job.

The government has been ramping up job support for seniors in the public sector. But critics say they are limited to menial, physically exhausting positions, such as janitors and delivery people.

"So much of their talent was being wasted. Leaving them idle is a waste," Cho Yeon-jeong said. "We wanted to prove that the seniors are still an asset, worthy of their status and experiences." 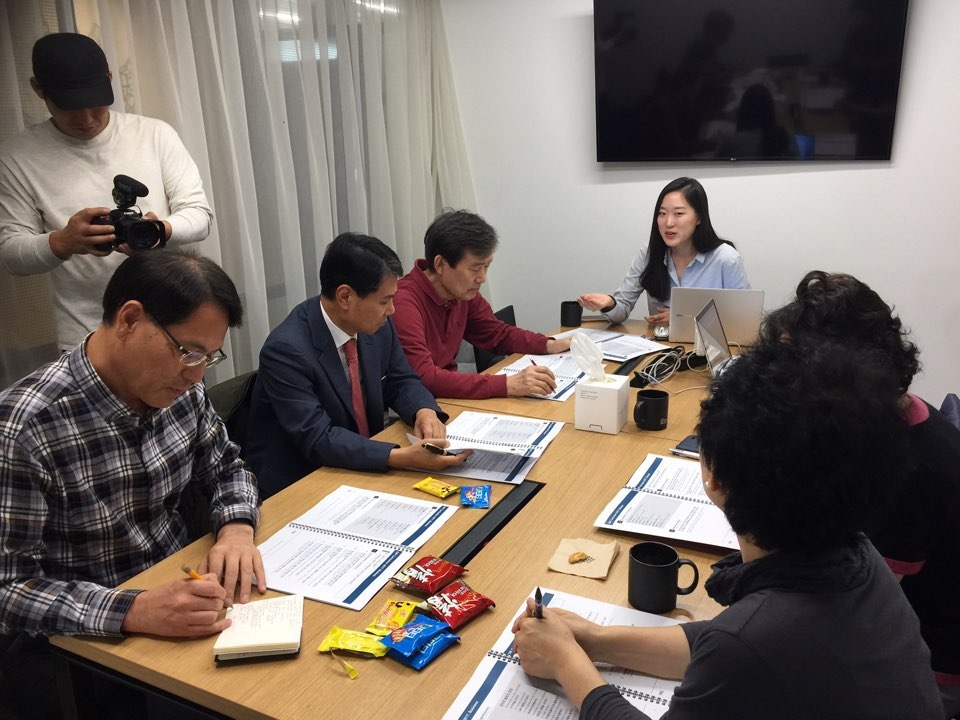 Having started with eight, SAY now has a pool of 25 regular freelancing senior tutors.

From "fresh" retirees, who have just been out of work for less than five years, to those who'd stayed jobless for years before joining SAY, devote themselves to tutoring jobs, Cho Yeon-jeong said.

"They spend hours preparing for each one-hour lesson. They consider this their second career."

They were teaching a total of 450 students from the United States, Canada, Europe and elsewhere as of July, with over 20,000 SNS followers.

Its brisk growth has earned it public recognition. After grabbing a number of local awards, Say Global made it to the 2019 list of the Forbes 30 Under 30 Asia. Earlier this year, Cho Yeon-jeong became the first South Korean to win the Cartier Women's Initiative Awards.

"I take it as a recognition of what we believed would make sense as a social mission, also made sense as a business," she said.

But the most rewarding moment for the SAY crew is when the tutors tell them how SAY has changed their lives.

"They tell me they are living a healthier life through this job. That they no longer feel marginalized in their families because they learn how to engage younger people through teaching Korean to young foreigners," Cho Yong-min said.

As a person engaged in senior employment, Cho Yong-min suggested that the government should pay more attention to young seniors as well.

"Government support centers on the elders in the most difficult situations, like those who live on subsidies or live alone. Young seniors who aren't as financially in trouble tend to be sidelined," he said. "But they should be part of the priority too, because their shared sense of alienation is as much a pressing matter that needs to be addressed."

In the long run, he hopes that SAY can serve as a channel for seniors to find themselves a new sense of belonging, where they gather to talk, share information and build communities.

"I think we need to keep asking, talk to them about what they want to do and can do, and see what we can offer them from there," Cho said. "In that way, we can grow further together."