SEOUL, July 15 (Yonhap) -- Youth, the main theme in the previous hit songs by five-piece K-pop rock band DAY6, such as "Congratulations" and "You Were Beautiful," still runs deep in its new album released Monday: "The Book of Us: Gravity" and its main track "Time of Our Life."

With its Korean title translated as "In order to become one page," the main track pictures the wishful starting point of a romantic relationship with a message to leave a beautiful page in "The Book of Us."

The new six-track album is the quintet's first music release since its fourth-EP "Remember Us: Youth Part 2" dropped seven months ago.

"Our albums, including what we have created lately, concern youth and human relations, but (in the end) I hope DAY6 becomes a band that sings about any and every kind of moment (in life) so one of our songs can be recalled to match any kinds of moments in life," the band's bassist Young K said in a recent interview with Yonhap News Agency and other news outlets. Young K is best known for his lyrics-writing talent and he single-handedly wrote the lines for all six tracks of the latest EP, "Gravity."

"Looking back on what I have written, I found that the lyrics become too much when I (write) with excessive ambition or exaggerate the feeling that I don't actually feel," Young K said, adding that now he is focused on "putting true feelings in the simplest possible expressions."

Since its debut in September 2015 under JYP Entertainment, DAY6 has carved out a unique presence as a much adored rock band in the K-pop scene, which is often dominated by mesmerizing dance music and performances.

Last year, DAY6 went on its first world-trotting concert tour, performing in 24 cities across the globe. In August, the band kicks off its second world tour, "DAY6 World Tour 'Gravity,'" set to hit a total of 26 cities, including Seoul, as the first leg, as well as New York, Chicago, Sydney, Singapore, Manila, Paris, London and Moscow.

"We are feeling the increased popularity in reality. But that does not make any difference in our attitude when we take the stage," guitarist Sungjin said.

"We are proud of and enjoy ourselves. The K-pop (scene) is mostly focused on (dance) performances, but I think we have gone into the K-pop market deep enough as a (rock) band," he said.

Keyboardist Wonpil was particularly impressed by foreign fans who came to the recent world tour's concerts far in advance and sang the band's songs in unison in their original Korean-language lyrics.

"It was like I was dreaming. It was such an honor that our songs were chanted in Korean in a foreign country far (from Korea)," he said, adding that the blending of the five members' different voices, some of them "powerful" or "saddening," may be the secret behind the band's increasing global appeal.

For drummer Dowoon, it's a source of psychological pressure to perform at a bigger concert venue to a bigger audience as the band gains influence.

"But it's positive pressure, which makes me wish to stage a performance that satisfies them all," Dowoon said.

Dowoon is the only member of the five who has not taken part in the creation of the band's music, including in "Gravity," for which the other four members jointly composed the six tracks.

"I am not good at multitasking ... And I usually focus on practicing so I can be a reliable drummer for our concerts," he said.

On top of the main track, "Gravity" carries five more tracks that explore landmark moments of youth, including "For Me," "How to Love" and "Best Part." 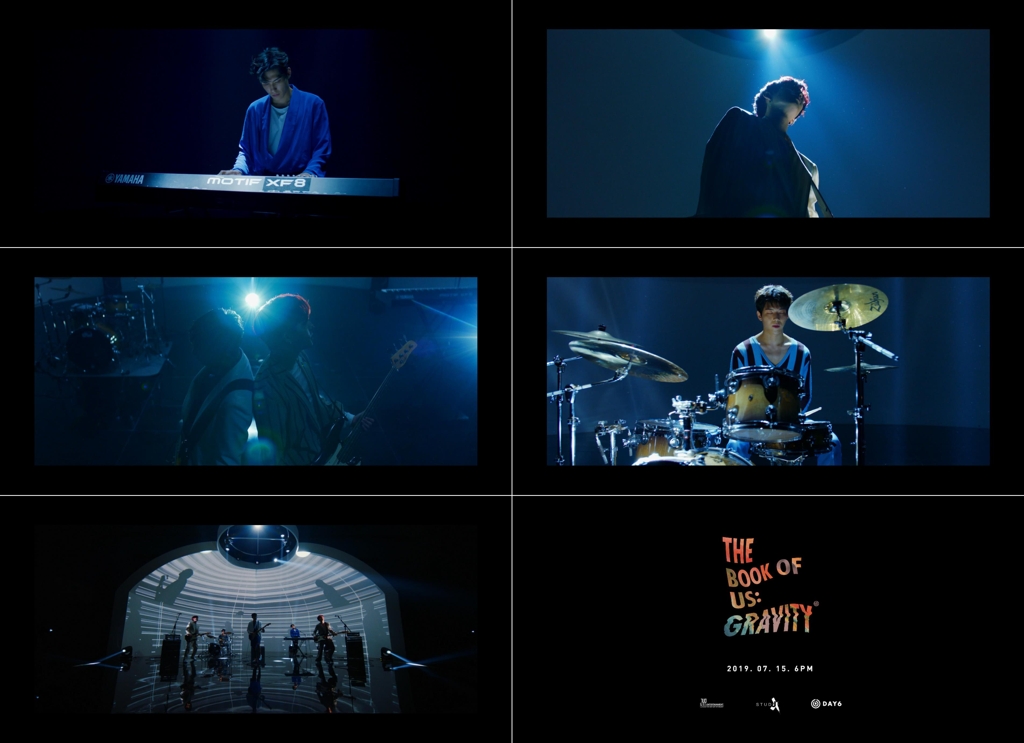