SEOUL, July 17 (Yonhap) -- Disney's latest movie, "The Lion King," is expected to dominate the South Korean box office as it accounted for about 70 percent of all advance ticket sales on the first day of its release, data showed Wednesday.

The film had sold more than 337,000 presale tickets as of 1:50 p.m., according to the data from the Korean Film Council (KOFIC). Marvel's "Spider-Man: Far From Home" bagged 6.6 percent of presales and Disney's "Aladdin" received 5.1 percent. 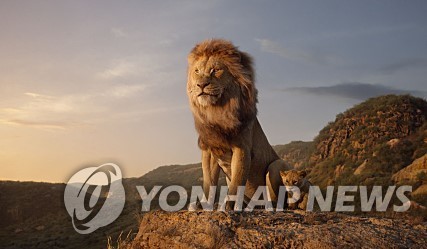 "The Lion King" is a photorealistic, computer-animated remake of the 1994 Disney animated musical drama of the same title.

It is one of the most anticipated films of the summer peak season and is forecast take over the top spot at the Korean box office from its Disney sister movies "Spider-Man" and "Aladdin," which have dominated the movie chart for weeks.

The KOFIC data also showed that "Spider-Man" had garnered an audience more than 100,000 to lead the daily movie table as of Tuesday, giving it 6.89 million admissions during its two-week run.

Runner-up "Aladdin," which was released on May 23, has sold a total of 10.3 million tickets to become the fifth most-watched foreign film ever in South Korea.