SEOUL, July 21 (Yonhap) -- South Korea's quarterly economic growth is estimated at 1 percent for the second quarter of the year, shifting from a contraction of 0.4 percent the previous quarter, financial industry sources said Sunday.

The Bank of Korea is set to unveil its estimate for second-quarter growth this week. Earlier, the central bank had predicted that Asia's fourth-largest economy would expand 1.2 percent during the April-June period.

But a drawn out trade dispute between the United States and China, combined with a sharp drop in semiconductor prices, has taken a toll on the economy.

South Korea's exports dipped for the seventh consecutive month in June amid the prolonged trade dispute between the world's two largest economies. Adding to this, prices of semiconductors, a key export item for South Korea, have remained weak.

In the face of its own trade feud with Japan, South Korea's economy is also increasingly facing headwinds.

The central bank unexpectedly cut the key rate by a quarter percentage point cut to 1.5 percent last week, while trimming its growth outlook for the year to 2.2 percent from its earlier 2.5 percent forecast.

But the BOK warned that economic uncertainty will further increase due to the flare-up of a trade tussle between the two neighbors.

"Without a breakthrough in the U.S.-China trade talks, a rebound in the chip making sector will be further delayed," said Yoon Chang-yong, an analyst at Shinhan Financial Investment Corp.

"It will not be easy to attain economic growth of over 2 percent," he said.

The BOK has signaled it would further cut the benchmark rate to prop up the economy. The government submitted a 6.7 trillion-won(US$5.69 billion) extra budget bill for parliamentary approval in early May, but it is still pending at the National Assembly. 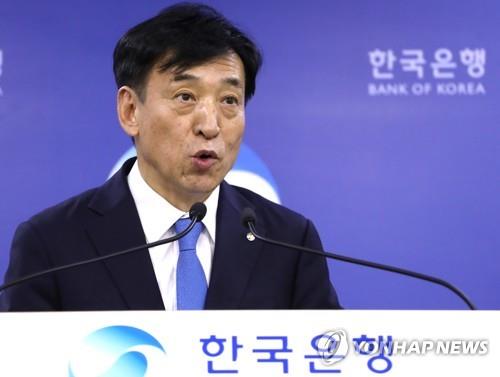