SEOUL, July 21 (Yonhap) -- South Korea has lifted its warning over Typhoon Danas as the tropical storm died down before reaching the southern part of the country, weather officials said Sunday.

Danas, the fifth typhoon of the year, had reached waters 50 kilometers off the southwestern island of Jindo by noon Saturday, when it was downgraded to a tropical depression, the Korea Meteorological Administration (KMA) said.

Most parts of the country are expected to remain cloudy on Sunday with the rain stopping during the afternoon, it said.

One person was injured and nine people have been evacuated, while 30 houses and some farmland were flooded in the southern part of the country, officials said.

Traffic restrictions are still in place on five roads in the southern part of the country after a slope collapsed on sections of road.

About 200 flights across the country have been canceled or suspended due to heavy winds over the weekend. 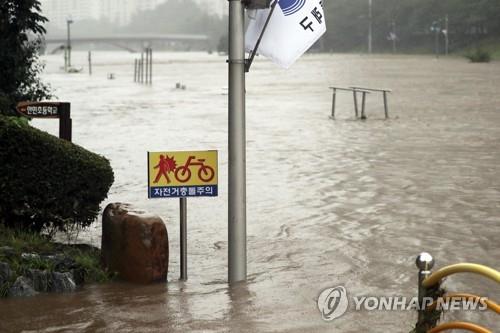