SEOUL, July 23 (Yonhap) -- U.S. National Security Adviser John Bolton began his two-day trip to South Korea on Tuesday, during which he will focus on consultations on a range of issues from North Korea to the Strait of Hormuz.

It especially comes as two major allies of Washington -- Seoul and Tokyo -- are locked in a confrontation over shared history and the Shinzo Abe administration's use of trade as political retaliation.

South Korea wants the U.S. to help resolve the trade friction in a diplomatic way.

Bolton landed at the U.S. Air Force base in Osan, Gyeonggi Province, not long after noon, flying from Japan.

"Wonderful to be back in Seoul so soon and looking forward to productive meetings with the leadership of our important ally and partner so vital to Indo-Pacific security and prosperity," he tweeted.

He is scheduled to visit the U.S. Embassy in Seoul and receive a briefing on pending issues, according to a source.

On Wednesday, he plans to hold a series of meetings with his South Korean counterpart, Chung Eui-yong, Foreign Minister Kang Kyung-wha and Defense Minister Jeong Kyeong-doo.

To be discussed are "pending major issues" between the two sides, including ways to establish a permanent peace regime through complete denuclearization, as well as strengthening their alliance, Cheong Wa Dae spokesperson, Ko Min-jung, told reporters.

President Moon Jae-in has no plan to meet Bolton in person. 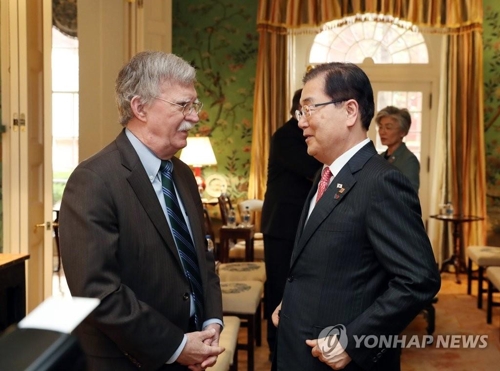 It's Bolton's second trip here in less than a month, after accompanying President Donald Trump in late June.

This time, he has a lot of topics to discuss with South Korean officials.

He's widely expected to make the case that South Korea needs to join U.S.-led efforts to ensure the free navigation through waters off Iran. Washington reportedly hopes that South Korea and other nations will dispatch troops and naval vessels or contribute funds for patrols in the Strait of Hormuz, via which a fifth of the world's oil passes.

Bolton will also listen to South Korea's position in its latest stand-off with Japan that was triggered by its sudden export restrictions against South Korean companies.

A senior Cheong Wa Dae official openly said the government will "objectively" review both the quality and quantity of military information it has exchanged with Japan to decide the fate of a related bilateral accord.

If Seoul discards the General Security of Military Information Agreement (GSOMIA), signed in 2016, it would deal a blow to Washington's pursuit of stronger trilateral security cooperation, a key to countering North Korea's threats, as well as checking China's growing military clout.

Another main agenda item in Bolton's talks with South Koreans is how to move forward the denuclearization and Korean Peninsula peace process.

The leaders of the U.S. and North Korea agreed to resume working-level nuclear talks during their spontaneous meeting at the Demilitarized Zone (DMZ) at the end of last month. No schedule has been set yet, while Trump continues to tout a "very good relationship" with North Korea and "very positive correspondence" recently from Pyongyang. Bolton is known for his hawkish stance on the North Korea issue. 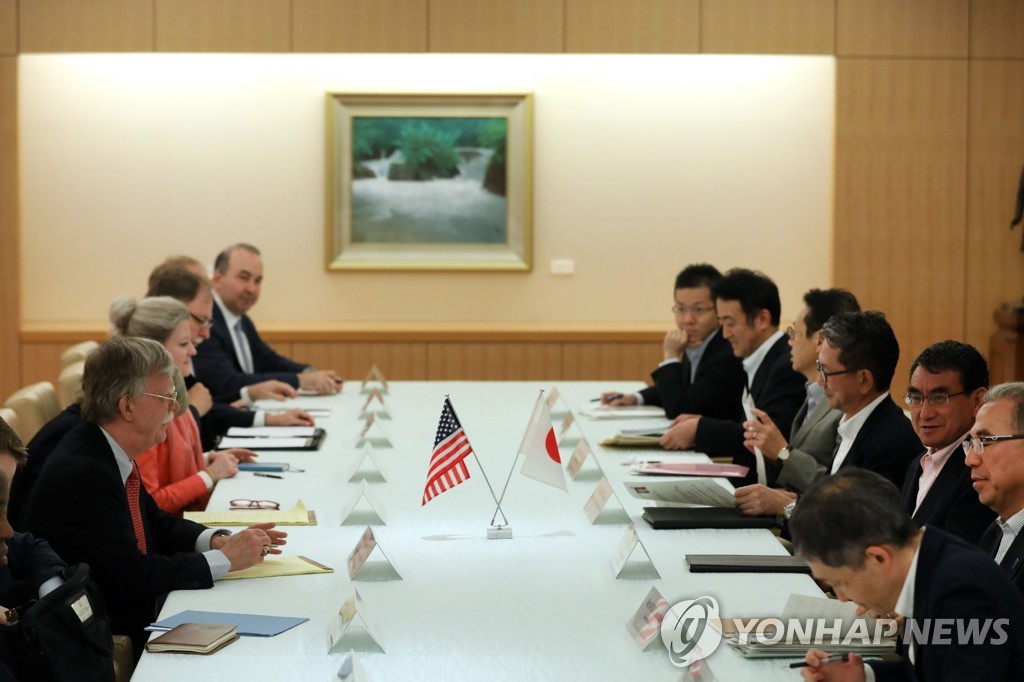 After talking with top Japanese officials in Tokyo on Monday, meanwhile, Bolton said he had "very productive discussions across a range of issues that are important from a security point of view to both the United States and Japan."

The two sides reportedly discussed Japan's potential role in maintaining stability in the sea lane between the Persian Gulf and the Gulf of Oman.

In a meeting with Foreign Minister Taro Kono, Bolton had a discussion on the Seoul-Tokyo tension, a local news report said.