SEOUL, Aug. 12 (Yonhap) -- A new "comfort women" memorial statue will be unveiled in Seoul this week, when the nation marks International Memorial Day for Comfort Women amid its intensifying diplomatic and trade conflict with Japan, officials said Monday.

The new statue, made by a nonprofit association of Korean residents in San Francisco and donated to the city of Seoul, has been erected near the former site of a Japanese imperial shrine on Mount Nam in the center of the capital, they said.

According to historians, up to 200,000 women, mostly Koreans, were coerced into sexual servitude at front-line Japanese brothels during World War II when the Korean Peninsula was a Japanese colony. Those sex slaves were euphemistically called comfort women.

The Seoul metropolitan government, the Seoul Metropolitan Office of Education and the nonprofit Comfort Women Justice Coalition will jointly hold the unveiling ceremony for the new memorial statue at 3 p.m. Wednesday, which also coincides with Korea's Aug. 15 National Liberation Day. 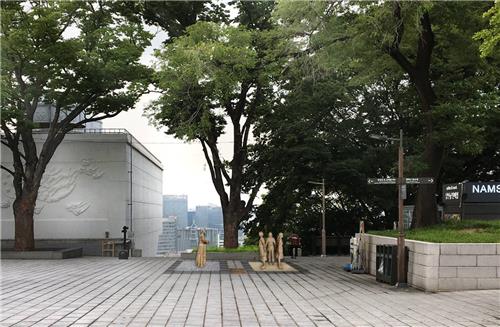 The South Korean government designated International Memorial Day for Comfort Women, which falls on Aug. 14, as a national memorial day last year, as the late Kim Hak-sun, a former comfort woman, first publicly testified on the same day of 1991 about Japan operating an organized military brothel program during World War II. Korea was under Japanese colonial rule from 1910-45.

The lifesize statue is of three girls -- one each from Korea, China and the Philippines -- staring straight ahead with their hands together, while the late Kim looks at them. Chinese and Philippine women were also victimized by Japanese sex slavery.

The Jin Duk & Kyung Sik Kim Foundation, a nonprofit based in the U.S. state of California, covered all the production and shipping expenses for the statue. Korean residents built a comfort women statue in San Francisco, the first in the U.S., in 2017. Both the San Francisco statue and the Mount Nam statue were the works of U.S. sculptor Steven Whyte.

Wednesday's unveiling ceremony will be attended by Seoul Mayor Park Won-soon, former comfort women living in South Korea and former U.S. Rep. Mike Honda, who has been devoted to getting Japan to apologize to former comfort women, officials said, noting the formal name of the statue will be determined later through a public naming contest.

On Tuesday, about 150 comfort women experts from South Korea, the United States and Japan, including Honda, will hold an international symposium at Seoul City Hall to discuss the outcomes of their activities and ways for further cooperation.

In the southern port city of Busan, meanwhile, an exhibition aimed at sharing the suffering of the victims of Japanese sex slavery and wishing for their healing took place on Monday.

The exhibition, whose Korean title is translated as "Sympathy for a Girl of Peace: We Were Family," opened for a five-day run at the city hall of the Busan Metropolitan Government.

Some 22 artworks by selected local artists are on display, with video clips on the victims also being screened.

The Busan municipal government also held a ceremony earlier in the day to commemorate the International Memorial Day for Comfort Women at the city hall, with some 200 citizens attending. 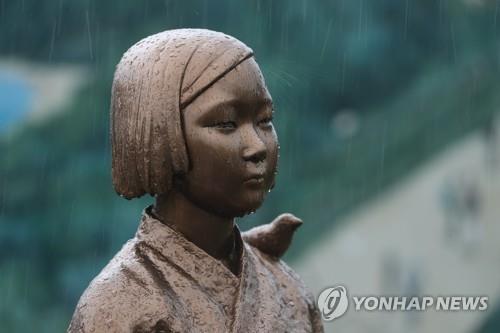