INCHEON, Aug. 13 (Yonhap) -- South Korean men's national volleyball head coach Im Do-hun isn't one to lose sleep over past defeats. The glass-half-full type believes there was much to gain for his team after going winless at a recent Olympic qualifying tournament.

Im and his team returned home Tuesday from the Netherlands, where they dropped all three matches at the FIVB Men's Volleyball Intercontinental Olympic Qualification Tournament. 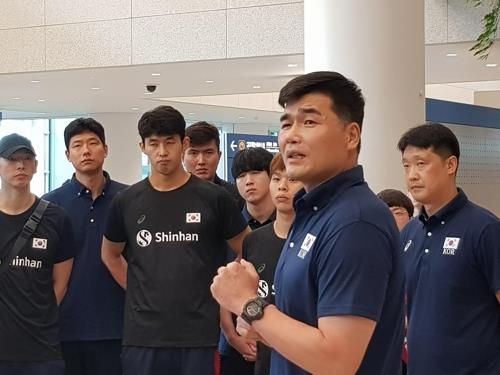 Ranked 24th, South Korea lost to the Netherlands (No. 15), the United States (No. 2) and Belgium (No. 12) in succession to finish last in Pool B. But Im said it will set up his team nicely for future competitions.

"Our young players gained confidence from this event," Im told reporters at Incheon International Airport in Incheon, west of Seoul. "Against Belgium, with our veterans not at 100 percent, some young guys stepped up and battled really hard."

Im singled out Hwang Taek-eui, a 22-year-old setter, and Heo Su-bong, a 21-year-old wing spiker, as part of the bright future for the program.

"This was their first tournament with the senior national team, and though they seemed nervous at times, they acquitted themselves well," Im added.

Only the six pool winners from the FIVB qualifiers secured direct qualification for the 2020 Tokyo Olympics, and South Korea will have to go through the Asian qualifying tournament in January next year.

Before that comes the Asian Men's Volleyball Championship in Iran in September. The top eight teams from the 16-nation event will qualify for the continental qualifiers. South Korea is expected to finish among the top eight there, but with only the winner of the Asian qualifying tournament making it to the Olympics, the task will get far more difficult in January. 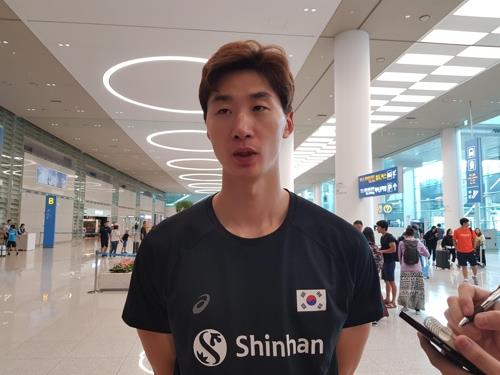 Iran, world No. 8, is considered the class of Asia, and Australia (No. 16) and China (No. 20) are both ahead of South Korea in the world rankings as well. South Korea hasn't competed in the Olympics since 2000.

"They're all tough opponents, but by January next year, our veterans will be able to compete in full health," Im said. "We'll prepare for it the best we can and make sure we won't have any regrets at the end."

Captain Shin Yung-suk said his mindset is to focus on the process and let the results take care of themselves.

"Iran and Australia will obviously be tough to beat, but they're not invincible," Shin said. "If we want to play in the Olympics, we're going to have to get past those tough teams."

Opposite striker Park Chul-woo said he was hoping Iran would qualify for the Olympics in the intercontinental event so that it wouldn't have to go through the Asian qualifiers in January, but that doesn't mean he will be intimidated against the Middle East power.

"In January, our guys will be in top form because it'll be in the middle of our professional season in the V-League," Park said. "We'll have all the best players available."