SEOUL, Aug. 14 (Yonhap) -- He's been the best pitcher on the best team in baseball so far in 2019. Will Ryu Hyun-jin of the Los Angeles Dodgers win the Cy Young Award as the best pitcher in his league at the end of the season?

Ryu is making a compelling case for a "Yes" with each passing start.

After blanking the Arizona Diamondbacks over seven innings of five-hit ball Sunday, Ryu improved to 12-2 with a major league-best 1.45 ERA, a number so low as to be absurd. 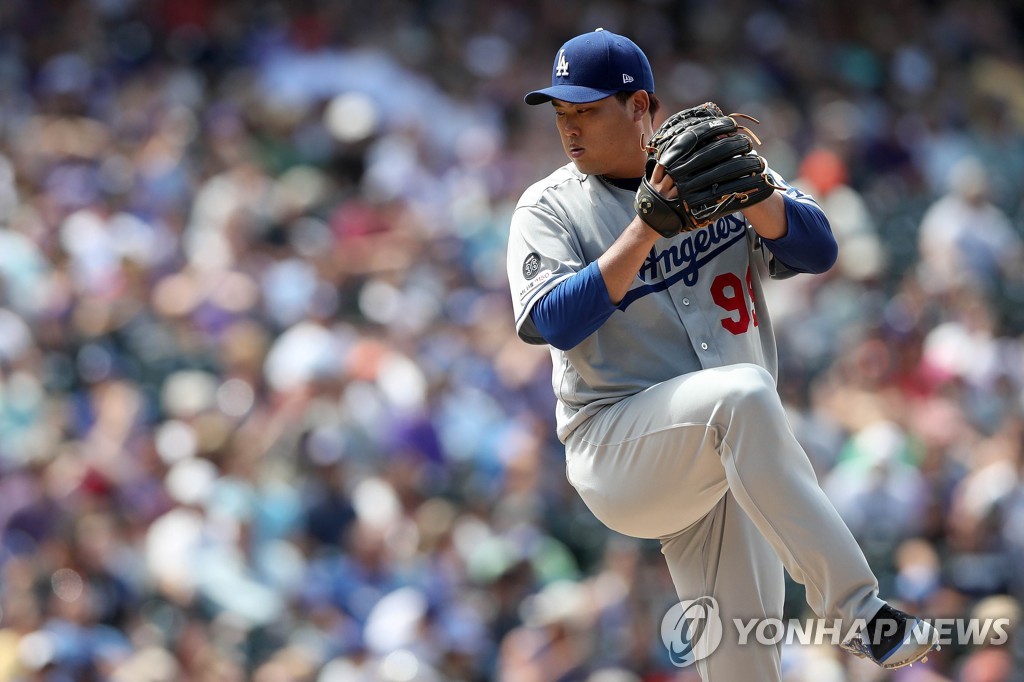 There have been a handful of recent ERA champions in Major League Baseball (MLB) with a sub-2.00 mark, but no one has won an ERA title with a mark below 1.50 since Bob Gibson for the St. Louis Cardinals in 1968 with 1.12.

In MLB rankings this year, Ryu leads the next best pitcher, Mike Soroka of the Atlanta Braves, by 0.87. The gap between Ryu and Soroka is larger than that between Soroka and the 14th-ranked pitcher, Cincinnati Reds' Sonny Gray, who has a 3.10 ERA.

Ryu's ERA has stayed below 2.00 since May 7. The only blip for Ryu this year has been a disastrous start against the Colorado Rockies at Coors Field in Denver on June 28, when he was touched for a season-high seven earned runs in four innings. He also allowed three home runs.

Since the debacle at the notorious hitters' park, Ryu has limited opponents to two earned runs in 47 2/3 innings across six starts with zero home runs allowed. And if you wipe out that start from Ryu's season, his ERA falls to a mind-boggling 1.04.

"If I could get rid of any record this season, it would be that start," Ryu said after Sunday's victory. "But games like those force me to focus harder in the next start."

In addition to his gaudy winning percentage -- tops in the National League (NL) at .857 -- and the historically low ERA, Ryu leads the way in other advanced stats. 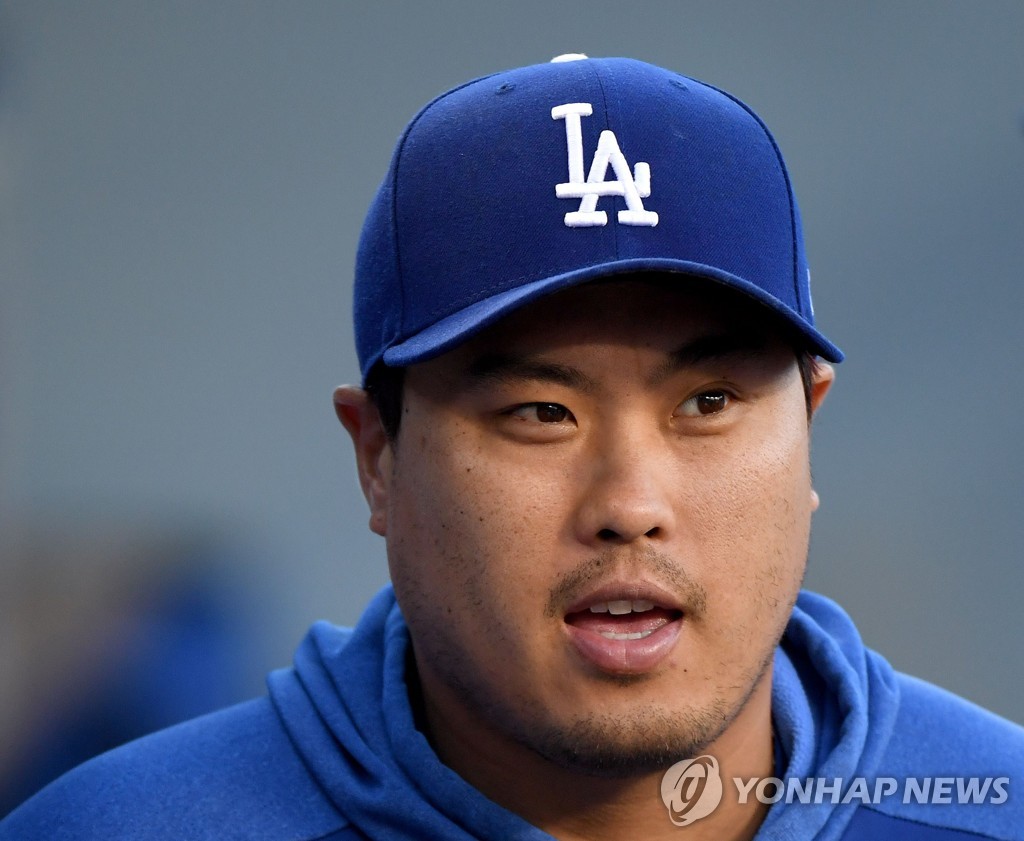 Two baseball websites, Baseball-Reference.com and FanGraphs, offer their own stats to measure pitchers' performances compared with the league average.

Baseball-Reference lists ERA+ and FanGraphs presents ERA- on their respective sites. Both stats compare a pitcher's ERA and compare it to the league average, and adjust the ERA to ballparks.

Ryu leads MLB in both categories. He has an ERA+ of 288, meaning the league ERA is 188 percent worse than Ryu's. The left-hander has an ERA- of 34, and it means he's been 66 percent better than the league average in ERA.

Ryu is also the best in baseball in fewest walks per nine innings (1.07) and walk rate (3.1 percent), which is the total number of walks divided by total batters faced. Ryu has allowed the fewest base runners per inning in the NL, with a 0.93 walks and hits per innings pitched (WHIP).

For all those head-spinning numbers, Ryu doesn't fit the profile of an overpowering, dominant ace who routinely reaches double figures in strikeouts in starts and whose fastball sits in the upper-90s. Ryu is a classic, "pitch to contact" hurler who has struck out 121 in 142 2/3 innings, for a middling strikeouts per nine innings rate of 7.63. Ryu may end up with the fewest strikeouts by a Cy Young-winning starting pitcher since Bartolo Colon had 157 in 2005 for the Los Angeles Angels.

Ryu is averaging only 90.6 mph with his four-seam fastball, which only puts him in the eighth percentile across MLB. Without a signature "out" pitch, the secret to Ryu's success has been an effective mix of all of his pitches.

According to MLB's Statcast, Ryu has been throwing and commanding five pitches this year: four-seam fastballs (27.8 percent of the time), changeups (27.8 percent), cutters (19.7 percent), sinkers (12.8 percent) and curves (11.9 percent). And he offers all of those pitches against both left-handed and right-handed batters. Few left-handed pitchers can claim that kind of versatility.

Aside from the changeup and curve, Ryu throws three variations of fastballs 60 percent of the time, and from the hitter's perspective, they're difficult to read because they all come out of Ryu's hand from virtually the same release point and have similar movements and velocities. 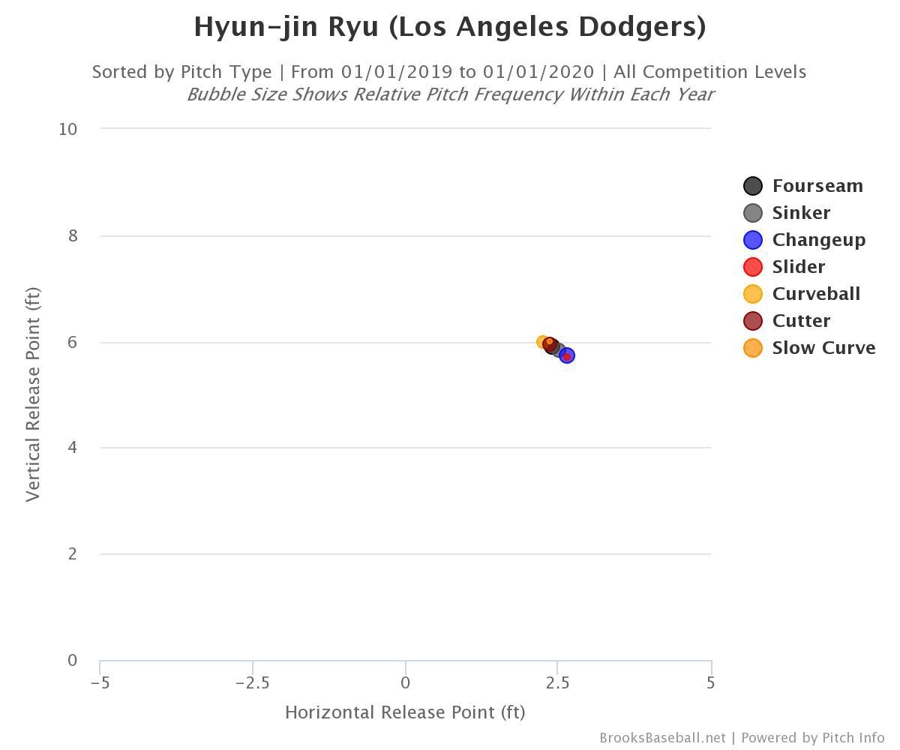 When a hitter starts the swing expecting one pitch and ends up getting the bat on another, it could result in a weak grounder as opposed to a scorching line drive or a pop fly rather than a home run.

Here's how his manager, Dave Roberts, put it after Ryu's latest start Sunday.

"He lulls you to sleep and then gets in on you with a cut fastball," Roberts said. "But then when he starts to smell the finish line, he can reach back for more."

One thing that may work against Ryu is that, although he is pitching for one of the most visible franchises in baseball, he doesn't have the reputation or pedigree of other Cy Young contenders.

One such contender is Max Scherzer of the Washington Nationals, a three-time Cy Young winner and one of the most feared pitchers of this generation. The other is the reigning Cy Young winner, Jacob DeGrom of the New York Mets.

Scherzer and DeGrom are tied for the NL lead with 189 strikeouts. They're third and fourth in the NL in ERA with 2.41 and 2.68, but they've yet to reach double figures in wins.

Scherzer is stuck at 9-5, and he has only pitched twice since July 6 while dealing with back and rhomboid strain. The 35-year-old must return to full health soon or he will be a forgotten man in the Cy Young race.

DeGrom, who won the 2018 Cy Young thanks mostly to a league-best 1.70 ERA despite a pedestrian 10-9 record, has been just as unlucky this season with a 7-7 mark. The right-hander has shaken off a rocky beginning to the season with a 3-0 record and a 0.95 ERA in the second half, but he may be running out of time to match Ryu in wins and ERA, let alone in other categories. 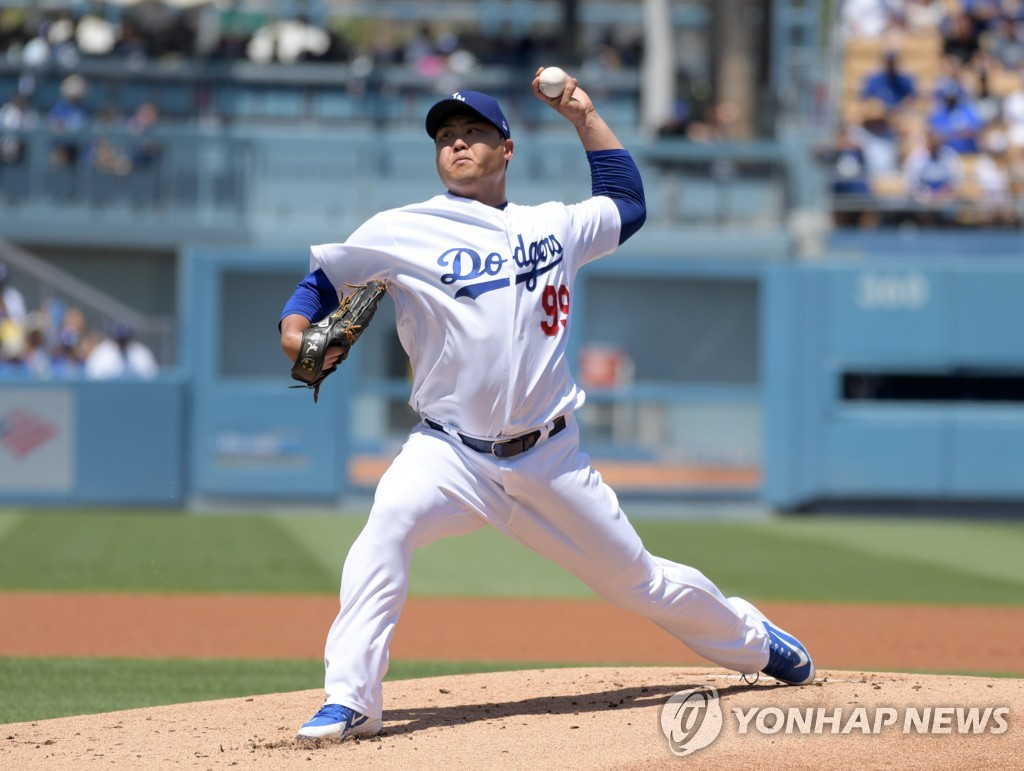 The aforementioned Soroka has more wins and lower ERA than both Scherzer and DeGrom but trails them in WHIP and strikeouts. The Canadian rookie has even less of a profile than Ryu, who has started in the World Series and the All-Star Game over the past two seasons.

The only thing standing between Ryu and the award may be his health. In addition to his shoulder and elbow issues, Ryu has also suffered injuries to his groin, foot, hip and neck. He's made at least one trip to the injured list every season since his sophomore campaign in 2014.

Amid the hype surrounding his chances of winning the Cy Young, Ryu has remained as stoic as ever.

"I don't think it'll help me if I try too hard to win the Cy Young Award; it's not something I can win just because I want to," he told reporters after Sunday's win. "I just have to go with the flow and not push myself too much."