In a Liberation Day address marking the end of Japan's colonial rule of Korea in 1945, Moon also laid out a vision to make South Korea an "unshakable, responsible economic powerhouse" and cooperate with Japan on an "equal" footing.

"Better late than never: If Japan chooses the path of dialogue and cooperation, we will gladly join hands," Moon said. "We will strive with Japan to create an East Asia that engages in fair trade and cooperation." 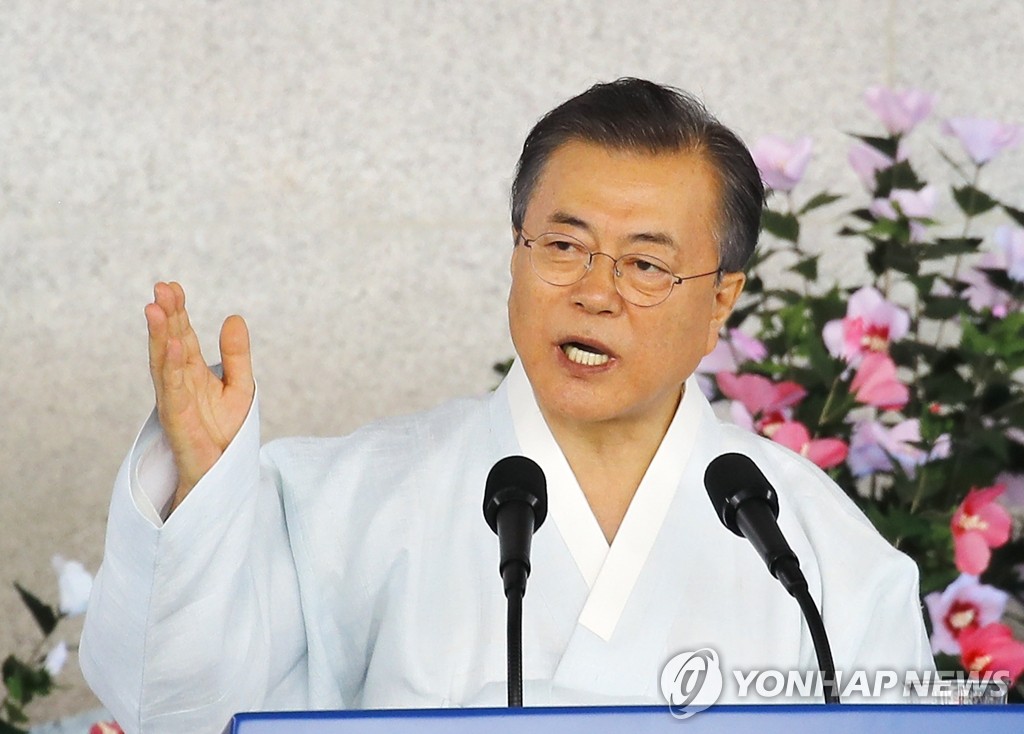 Moon's televised statement represented one of his clearest dialogue overtures toward Tokyo since it launched apparent economic retaliation against Seoul in early July over the wartime forced labor issue.

Moon repeatedly used the words cooperation, prosperity and peace throughout his nearly half-hour speech during a ceremony held at the Independence Hall of Korea, located in Cheonan, 85 kilometers south of Seoul.

The president emphasized that the neighbors should overcome the past and move toward the future together.

"We hope that Japan will play a leading role together in facilitating peace and prosperity in East Asia, while it contemplates a past that brought misfortune to its neighboring countries," he said.

"This will mark an unprecedented series of Olympics held in East Asia," he said. "It will be a golden opportunity for East Asia to solidify the framework of friendship and cooperation, and to progress along the path toward common prosperity."

He added, however, Japan should first stop using trade as a "weapon."

"Within the international division of labor, if any country weaponizes a sector where it has a comparative advantage, the peaceful free trade order will inevitably suffer damage," he said. "A country that achieved growth first must not kick the ladder away, while others are following in its footsteps." 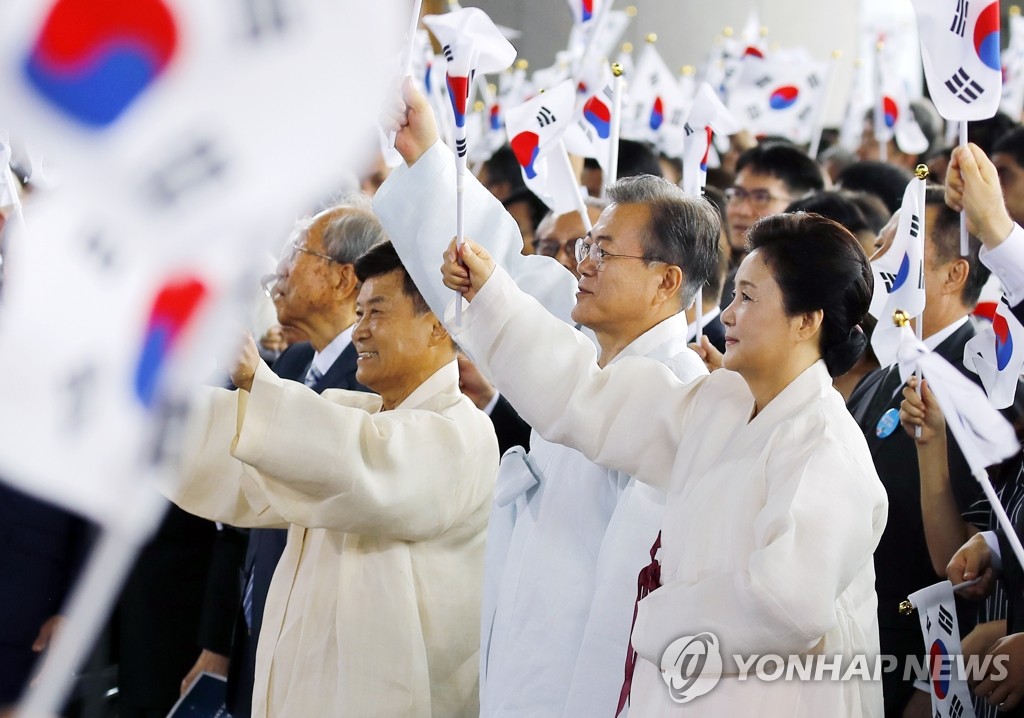 Japan recently dropped South Korea from its whitelist of favored trade partners in apparent reprisal for Seoul's handling of the compensation issue related to those forced to toil at Japanese factories and mines during World War II. Seoul hit back by removing Tokyo from its own whitelist.

The trade spat has again demonstrated that the legacy of colonization still haunts relations between the top allies of the United States.

South Koreans believe that Japan has not atoned sincerely for its past wrongdoings, while Japan says it has done enough.

Moon stressed the need for "equitable" cooperation among regional countries.

"The Asian community will not be led by a single state but will instead become a community where diverse cooperation blossoms among countries on an equal footing," Moon said.

However, he added, South Korea has yet to become a nation that won't be shaken up by external pressure.

"That is because we still lack sufficient strength and remain divided," he said.

He set his sights on a country that serves as a "bridge by taking the lead in promoting peace and prosperity on the continent and out in the ocean."

His administration's two major diplomatic initiatives -- the New Southern Policy and the New Northern Policy -- are part of the efforts.

The first step to play such a bridge role is connecting the severed railroads and roads with North Korea, according to the liberal leader, Moon said.

On the denuclearization process, he stressed the importance of working-level talks between Pyongyang and Washington to arrange a third summit.

"This will probably constitute the most critical juncture in the entire process of achieving denuclearization and establishing peace on the Korean Peninsula," he said. "Now is the time for both Koreas and the United States to focus on resuming working-level negotiations between Pyongyang and Washington at the earliest possible date."

Even if there's a "cause of dissatisfaction," both sides should discuss it at the negotiating table, he added.

He presented a longer-term goal of lasting peace on the peninsula.

"I pledge to solidify the foundation so that we can successfully host the joint 2032 Seoul-Pyongyang Olympics and stand tall in the world as one Korea by achieving peace and unification by 2045, which will mark the 100th anniversary of liberation," he said.

"A new Korean Peninsula, one that will bring peace and prosperity to itself, East Asia and the world, awaits us," he said, wrapping up the speech. "We can do it!" 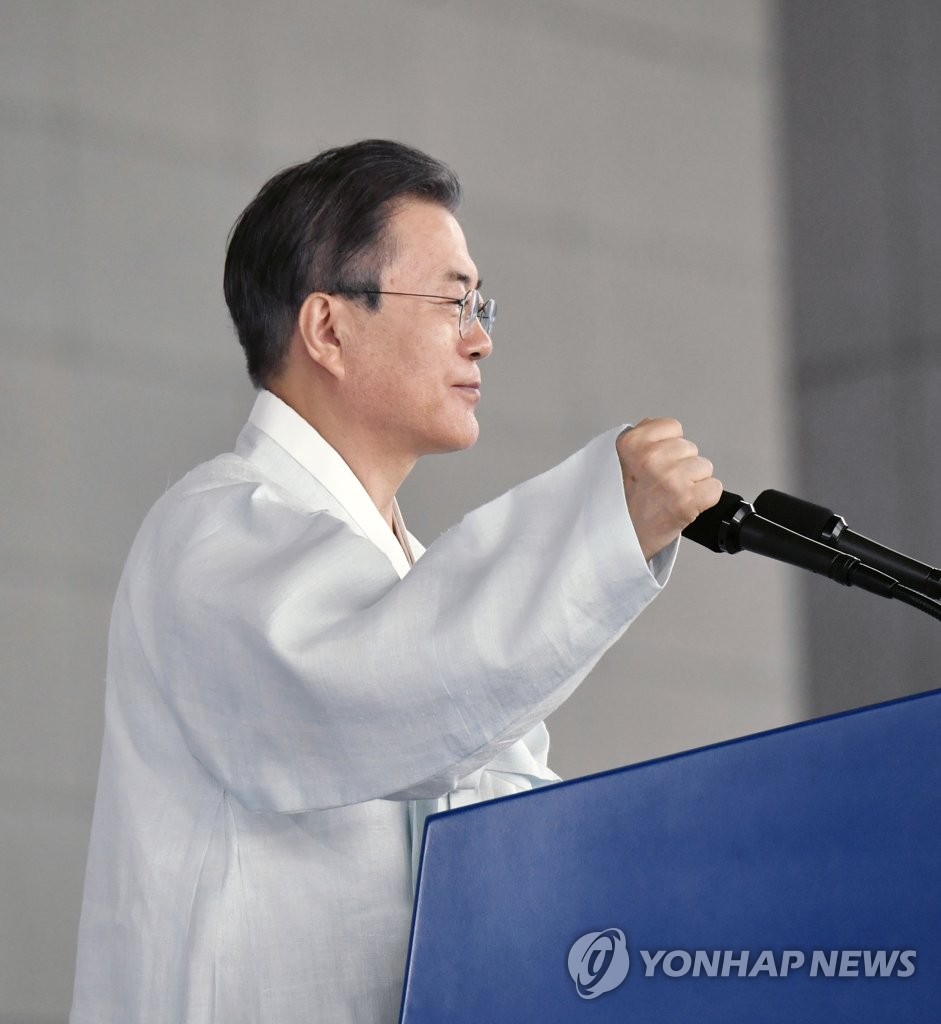