U.S. Ambassador to South Korea Harry Harris made the request at a closed-door meeting with CEOs of the top 30 local companies at the Federation of Korean Industries (FKI) building in Seoul, according to the FKI and the U.S. Embassy here.

Harris urged those participants to contribute to resolving the trade row by increasing contact with Japanese firms since the restoration of Seoul-Tokyo relations is vital for Washington's India-Pacific strategy. 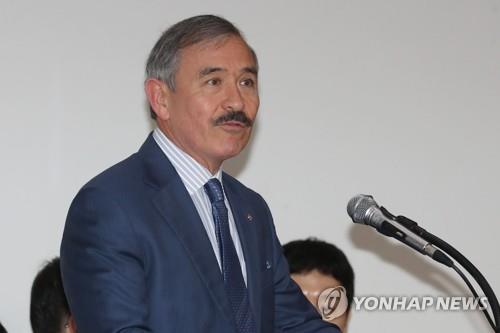 A participant quoted Harris as saying that a quick and smooth resolution of the trade dispute is not only important for both economies and global supply chains but also for a security alliance among the United States, South Korea and Japan.

South Korea and Japan have been locked in the trade row since Japan curbed exports of key materials to South Korea on July 4 in apparent retaliation over a spat surrounding wartime forced labor.

Early this month, Tokyo upped the stakes by dropping South Korea as a trusted trading partner. Seoul later retaliated with the same move.

According to participants, the U.S. ambassador refused to answer a question on the trade war between Washington and Beijing, saying he is not an expert on the issue.

The world's two largest economies have been waging a protracted and bruising trade war, which is having a far-reaching negative impact on the global economy.

Later in the day, Harris tweeted that at the breakfast meeting, he talked about America's trilateral cooperation with its two core Asian allies.

"I talked about the iron-clad U.S.-ROK (Republic of Korea) Alliance, close economic & people-to-people ties, and tri-lat coop w/ROK, JPN (Japan), USA," he tweeted after the meeting with the Federation of Korean Industries.
(END)