Ku's legal agency, LIWU Law Group, said the 35-year-old actress and 32-year-old Ahn have never reached an agreement on divorce, though they had previously discussed the matter.

The couple drafted a divorce contract but have neither signed nor sealed the document, the law firm said, noting the actress was not responsible for the troubled marriage now in its third year.

It explained the couple had once considered a divorce, as mutual trust was damaged after Ahn was caught communicating "closely and frequently" with a number of other women while intoxicated.

"Ku has already written on her Instagram she is unwilling to seek a divorce due to her wish to keep her family and in consideration of possible mental shock to her mother. Her determination still remains unchanged," the agency said.

Ku and Ahn, who met on the set of KBS 2TV's fantasy-medical series "Blood," began dating in 2015 and tied the knot the following year. 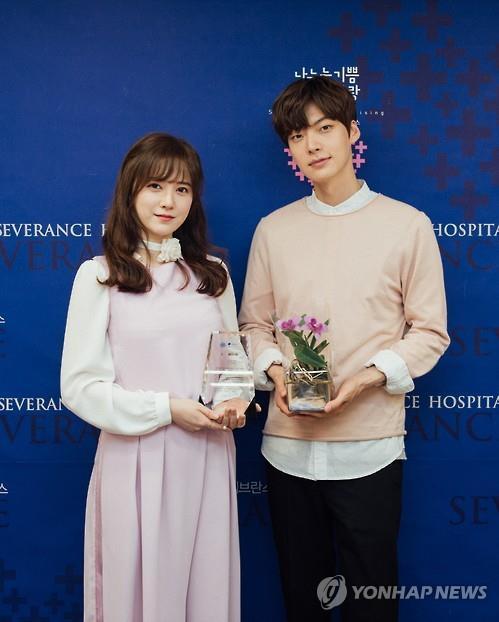 Ku debuted in 2002 in a television commercial and became a star actress through a number of hit shows, including MBC TV's sitcom "Nonstop" and KBS 2TV's romantic series "Boys Over Flowers." The actress recently debuted as a film director, a painter and a writer.

Ahn gained instant popularity in 2014 for his supporting role in "My Love From the Star," playing the rebellious younger brother of the heroine Cheon Song-yi, played by actress Jun Ji-hyun. He was one of the main hosts of the second season of tvN's entertainment show "New Journey to the West."

Talks of divorce between Ku and Ahn made headlines over the weekend after their management agency HB Entertainment announced that the two actors have recently reached a point where they can no longer continue their marriage life due to various problems and decided to part ways after serious discussions.

According to LIWU, Ku now wants to terminate her contract with HB Entertainment, accusing it of unnecessarily intervening in the private life of its actors. The law firm also warned it will take legal action against HB if it fails to cooperate with Ku's request.