SEOUL, Sept. 6 (Yonhap) -- A Seoul court on Friday sentenced Hyosung Group Chairman Cho Hyun-joon to two years in prison for embezzlement but exempted him from court custody, citing no risk of destruction of evidence or flight.

The Seoul Central District Court handed out the jail term to Cho, who was indicted in January for having incurred 17.9 billion won (US$14.95 million) in losses for Galaxia Electronics Co., a Hyosung affiliate in which he is the largest shareholder, by having the firm repurchase its own shares at a higher price in July 2013.

He was also accused of making an illicit profit of 1.2 billion won in 2008 and 2009 by selling 38 privately purchased artworks to Art Fund, a Hyosung affiliate, at higher prices.

In addition, he was suspected of putting four actresses acquainted with him on the company payroll and paying them 370 million won, though they were never actually employed. He was also accused of paying 1.24 billion won to one of his close confidants, surnamed Han, by the same method between 2002-2011.

"The accused committed embezzlement for private interest and gained profit by selling artworks at higher prices than the real ones, inflicting damage on other shareholders. The nature of the crime is bad," the court said.

But the court said it would not take Cho into custody as it sees no risk of destruction of evidence or flight. 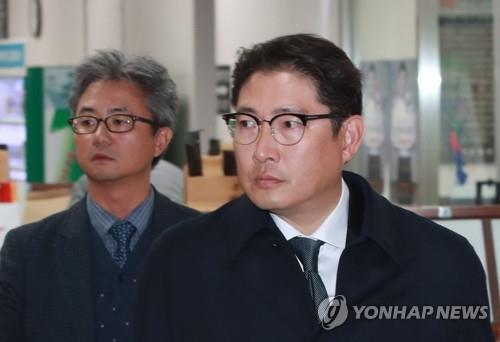