Also, it opened a new website, http://www.koreanow.com, making all KOREA NOW's YouTube content accessible even to non-subscribers on both computers and smart devices, offering an optimized page for each platform.

Yonhap News Agency held a ceremony on Monday to celebrate the launch of the new webpage and the surpassing of 100,000 subscribers, with executives from the company and its affiliates, including Yonhap News TV and Yonhap Infomax, attending.

Combining video journalism, information and entertainment, KOREA NOW represents the latest in the news agency's efforts to embrace the technology that is fast reshaping the media landscape.

The channel delivers daily news, titled "Korea's Daily," at 6 a.m. and 6 p.m every weekday, with the recent addition of "60 Second Headlines" aired every morning.

Its "K-Culture" program on the everyday life in Korea and updated news on Korea's top culture icon, BTS, are among the most popular clips on KOREA NOW channel.

"We are trying to provide a wide range of content focusing on the North Korean nuclear issues, the "Hallyu" (Korean Wave) scene, the lives of our Korean youth, and the leading lifestyle trends in Korea," KOREA NOW's Editor in Chief Shin Ji-hong said in a press release. "Our aim for this channel is to offer a platform of communication, where anyone interested in Korea could come together, enjoy, and share information on Korea." 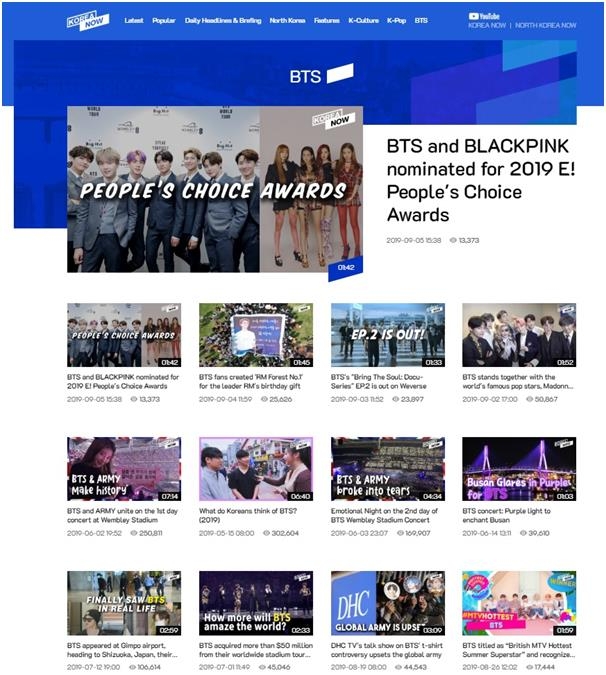