Saudi Arabia shut down about half of its oil production Saturday following a series of drone attacks that damaged two key oil installations. A Yemeni rebel group has claimed responsibility. The Saudis said that the closure will affect 5.7 million barrels of crude production a day, about 5 percent of the world's daily oil production.

Local refiners said there will not be a significant supply disruption, although they think a short-term price hike is inevitable. 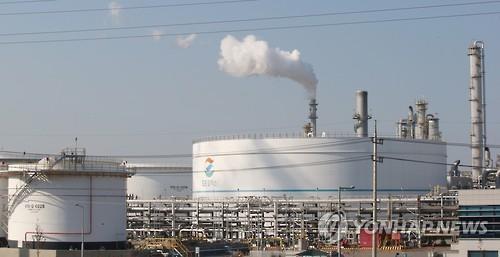 S-Oil Corp., which gets most of its crude from No. 1 shareholder Saudi Aramco, said supply disruption is unlikely since oil reserves from Saudi's top oil firm are stored in countries such as the Netherlands and Japan.

"We'll have to see how the situation develops, but we do not expect to see a supply disruption problem," an S-Oil official said.

"Since refiners have diversified their sources of crude imports, there will not be a significant supply problem," a spokesman from the company said. "It's likely that oil prices will surge in the short-term, but we'll have to assess how that will affect our business."

Crude prices spiked Monday morning following the attack. Brent crude, a benchmark in the European market, soared nearly 20 percent during the trading session Monday before settling down to a 10-percent increase, closing at $66.20 per barrel. West Texas Intermediate jumped 9 percent to $59.70 per barrel.

"Saudi Arabia and the U.S. said they will release oil reserves, so there will not be supply disruptions in the long-term," said Han Yun-ji, an analyst at Shinhan Investment Corp. "However, even if they release reserves, it can't prevent speculative buying prompted by political unrest in the region, which will push up oil prices."

Local refiners said they are carefully assessing the impact of a crude price hike on their refining margins.

Margins are the difference between the total value of petroleum products coming out of an oil refinery and the cost of crude and related services, including transportation.

Usually, South Korean refiners generate profit if the refining margin stays above at least $4 per barrel.

A rise in crude prices pushes up the cost of purchasing crude, but it also raises the prices of petroleum products and improves crude inventory values, which may help jack up their earnings. However, industry insiders said that the situation may not be all good for the refiners.

"In this kind of situation, speculative buying of petroleum products goes up and pushes up prices, so refiners' margins usually get better," an official from local refiner said on condition of anonymity. "However, this crude price hike is due to supply problems, not an increase of demand, meaning it's not going to be sustainable."

But shares in refiners rallied on the Seoul bourse, driven by hopes that their earnings will improve. SK Innovation jumped 2.67 percent to 173,000 won, while S-Oil inched up 2.31 percent to 102,000 won.

Analysts expected that the petrochemical industry will not see a big impact from the Saudi Arabia oil attack since price hikes in naphtha, the most common material for making petrochemical products, will be limited.

"Prices of liquefied petroleum gas, which is used as an alternative feedstock to naphtha, are weak, and due to a reduction of operations by global chemical firms, prices of naphtha are likely to see a limited hike," said Baek Young-chan, an analyst at KB Securities Co. "For the petrochemical industry, what's more important is the U.S. and China reaching a trade agreement."

Meanwhile, the South Korean government said it is also closely monitoring the situation and vowed to take measures to minimize the impact of Saudi oil facility attack on the local market.

"We'll cooperate with refiners to secure crude from other oil producing countries, and will do our best to manage price fluctuations in domestic petroleum product prices," the Ministry of Trade, Industry and Energy said following its special meeting with companies in the refining industry. "If the situation gets worse, we'll consider use of emergency oil reserves to stabilize oil prices."

The energy ministry added that since Saudi crude is imported on long-term contracts, there will not be a significant supply disruption in the country.