SEOUL/TOKYO, Sept. 20 (Yonhap) --- South Korea and Japan held working-level diplomatic talks in Tokyo on Friday apparently to discuss the possibility of a meeting between their top diplomats during the U.N. General Assembly in New York next week and other issues.

Kim Jung-han, director-general for Asian and Pacific affairs at Seoul's foreign ministry, met his new Japanese counterpart, Shigeki Takizaki, for the first time since the latter was appointed earlier this month.

Their talks came after Seoul formally removed Tokyo from a list of favored trade partners Wednesday and filed a complaint against Tokyo at the World Trade Organization on Sept. 11 in response to Japan's new export restrictions. 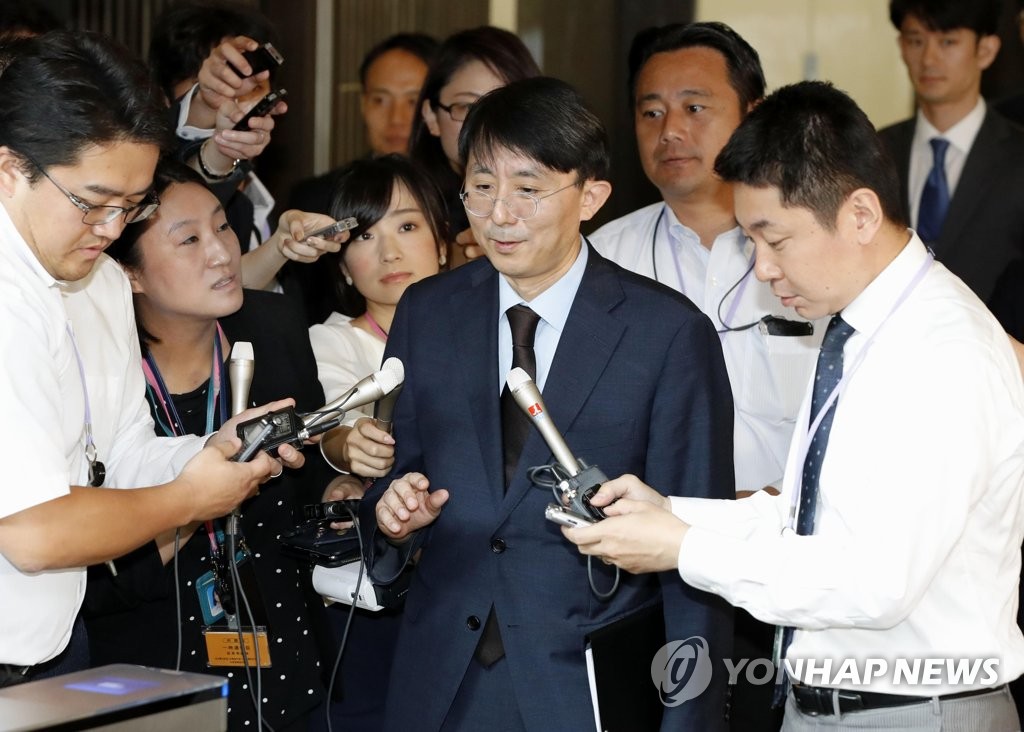 The working-level talks apparently reflected the will of the countries' diplomatic authorities to continue communication and prevent further escalation of tensions in their bilateral ties.

Seoul's foreign ministry said that during his talks with Takizaki, Kim urged Tokyo to promptly retract its "retaliatory" export restrictions and pointed out the need to address the issue through dialogue between the export control authorities of the two countries.

"Kim also requested that the Japanese government pay special attention to the protection of South Koreans and any potential damage to them in consideration of anti-Korea sentiment within Japan," the ministry said in a press release.

In response, the Japanese official reportedly called on Seoul to withdraw its own measure to drop Tokyo from its trade whitelist.

He demanded that South Korea ensure no actual damage to Japanese firms from the court ruling and maintain a bilateral military information-sharing agreement, according to Japan's Kyodo News.

Last month, the Moon Jae-in administration announced a decision not to renew the General Security of Military Information Agreement (GSOMIA), which is slated to expire in November, in a countermeasure against Japan's use of trade as a political weapon.

With regard to the problem of handling contaminated water stored at the tsunami-devastated Fukushima nuclear plant, Takizaki also argued that South Korea's related assertion has no scientific ground and expressed concern about potential "unjust effects from rumors," Kyodo said.

Kyodo earlier said the two sides are in consultations to hold the ministerial meeting in New York next Thursday.

If held, it would mark their first meeting since Tokyo's top diplomat was appointed in a recent Cabinet reshuffle.

Even if they meet, Kang and Motegi are unlikely to work out any serious deal on key issues of mutual concern given that their first meeting is expected to be a session to get to know each other and exchange their views on those issues in broad generalities.

Seoul and Tokyo have planned to hold such director-general-level talks once a month.