SEOUL, Oct. 2 (Yonhap) -- North Korea appears to have timed Wednesday's firing of a presumably submarine-launched ballistic missile (SLBM) to bolster its bargaining leverage ahead of nuclear talks with the United States later this week, analysts said.

The latest launch could also be a display of its anger over South Korea's showcase of F-35A radar-evading fighters and other leading-edge weapons systems at its 71st Armed Forces Day ceremony on Tuesday.

Earlier in the day, Pyongyang fired off what is thought to be an SLBM into the East Sea, raising military tensions in the run-up to the working-level nuclear negotiations with Washington, which it said will resume on Saturday.

"Given the timing of the launch, the North appears to have wanted to strengthen its negotiation position ahead of the talks and ramp up pressure on the U.S. to come up with a new calculation method acceptable to Pyongyang," Park Won-gon, a professor of international politics at Handong Global University, said.

On Tuesday, the North's First Vice Foreign Minister Choe Son-hui said that Pyongyang and Washington agreed to resume talks on Saturday following the two sides' "preliminary contact" on Friday. She did not mention the venue for the talks.

The envisioned talks will mark the first nuclear negotiations between the two sides since February's summit between U.S. President Donald Trump and North Korean leader Kim Jong-un broke down without a deal due to gaps over Pyongyang's denuclearization measures and Washington's sanctions relief.

Analysts paid keen attention to the type of the projectile, likely an SLBM this time, as the submarine-based platform is regarded as a formidable one that can hardly be detected before it emerges from underwater.

A country with nuclear ambitions usually seeks to develop and possess SLBMs as it could be a centerpiece of its nuclear deterrence message, showing that it could launch a credible retaliatory strike even after sustaining a first strike.

"The launch of an SLBM, if confirmed, can be seen as a step close to what could be a red line that Trump does not want to see the North passing," Professor Park said.

"With the SLBM, North might have sought to insinuate that it would not give up on its core nuclear deterrence capabilities, while heaping pressure on the U.S. to show flexibility," Park said.

Some observers say that the North's latest saber-rattling is driven more by its displeasure over the South's display of high-tech weapons that it has criticized as a sign of hostile intent. The launch could also be designed to play to the North's domestic audience by presenting another symbol of military strength.

Speculation has emerged that the launch is connected with Pyongyang's push to maximize its military reinforcements that could be restrained at least outwardly when nuclear talks go into full swing.

Koh Yoo-hwan, a professor of North Korean studies at Dongguk University, attributed the launch to the North Korean leader's eagerness to test any new weapon when briefed on it.

"Regardless of messages to the South or the U.S., Kim has shown tendencies to see firsthand and test new weapons immediately when they are developed," he said. 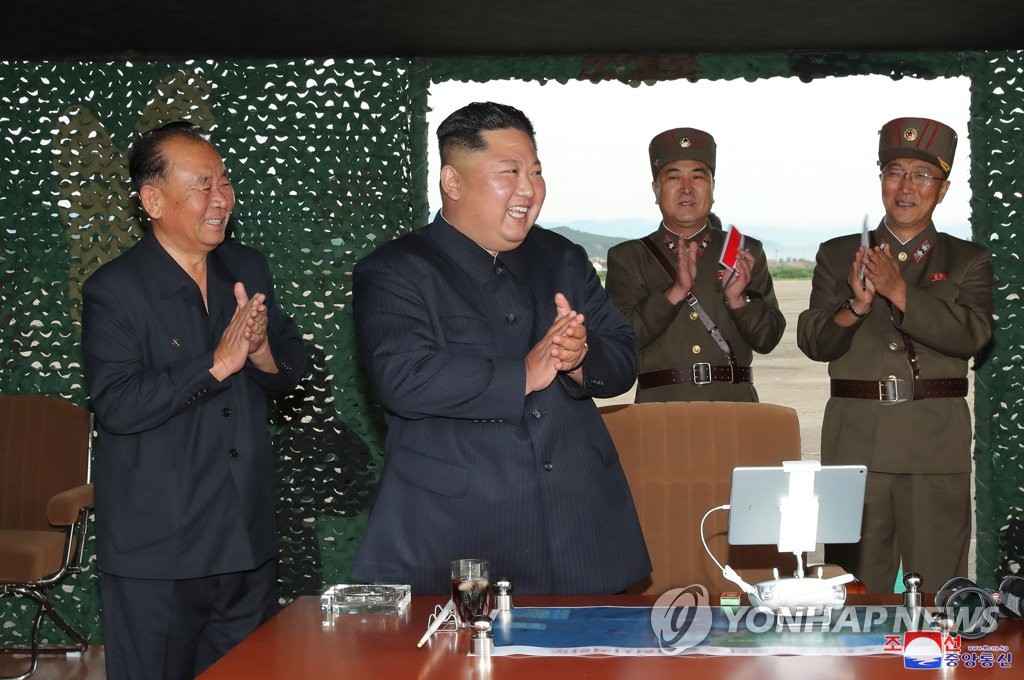 Whatever intentions may be, the upcoming negotiations between the U.S. and the North are expected to be an uphill battle, as they still remain far apart over the scope of Pyongyang's denuclearization, its disarmament method and what rewards to receive in return.

But political needs could drive the two sides into more actively exploring the possibility of an agreement even if it means an interim one short of the North's complete, verifiable denuclearization, analysts said.

Ahead of his full-fledged reelection battle, Trump has apparently been keen on achieving a diplomatic coup in his engagement with Pyongyang that could help overshadow the lack of progress in other foreign policy challenges, including those involving Iran and Venezuela.

Kim has also seemed intent on a compromise with Trump, as he is in dire need of outside assistance and sanctions relief to make headway in his hitherto unfruitful five-year economic development initiative rolled out in 2016.

For the North's third-generation hereditary successor, economic reconstruction is a critical policy goal that could help shore up his legitimacy as a state leader that has been rooted largely in his predecessors' past achievements rather than his own.

Ahead of the working-level talks, there have been a series of developments that have raised the possibility of the two sides exerting more flexibility at the negotiation table.

Trump has been seen warming to Pyongyang's call for a "new calculation method," while the ouster of his hawkish top security advisor John Bolton raised the prospects of Washington and Pyongyang being more willing to explore a compromise.

North Korean officials have also voiced hopes for the upcoming nuclear talks, saying they will accelerate the positive development of the two countries' relations.

Some observers, however, raised concerns over the possibility of Trump's ongoing impeachment probe affecting the nuclear negotiation process, as Pyongyang's trust in the U.S. administration could wane as the investigation intensifies.