SEOUL, Oct. 5 (Yonhap) -- An army of high-profile K-pop stars, including sensational rookie band X1, will get together for a joint concert in southern Seoul on Saturday.

The Yeongdong Boulevard K-pop Concert set to begin at 7 p.m. is the highlight of the annual Gangnam Festival, organized by Seoul's Gangnam Ward Office.

The eighth edition of the festival kicked off Sept. 25 under the theme, "Spar:K Gangnam," and will run till Sunday.

The Saturday concert will be held at a special outdoor stage set up in front of the Convention and Exhibition Center at the southern foot of Yeongdong Bridge across the Han River. Admission is free of charge.

The concert will be later broadcast by cable music channel Mnet on Oct. 13, according to the Gangnam ward office.

"Gangnam is a place that hosts the most number of major talent agencies (in Seoul) and the stronghold of 'hallyu' culture," Jung Soon-kyun, head of the Gangnam ward, said, vowing efforts to turn the annual Gangnam Festival into a world famous tourist attraction. 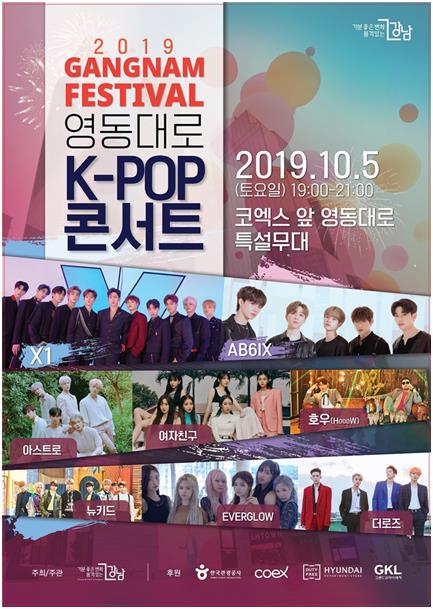