SEOUL, Oct. 6 (Yonhap) -- South Korea is working hard to conclude free trade talks with Malaysia, the Philippines and Indonesia before November when leaders of the Association of Southeast Asian Nations (ASEAN) meet in the country, a presidential aide said Sunday.

Asia's fourth-largest economy already has a free trade agreement with ASEAN, but the country is seeking to broaden economic ties with individual members through separate free trade deals amid growing protectionism.

"South Korea and the ASEAN member states shared the opinion that trade between the two sides should increase amid deepening trade protectionism," Joo Hyung-chul, a Cheong Wa Dae adviser for economic affairs, said at a press briefing.

The presidential aide said Seoul is seeking to strike respective deals with the three ASEAN nations before the summit in the southern port city of Busan. 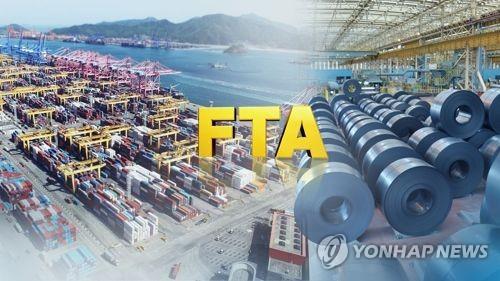 Asia's No. 4 economy has been making efforts to diversify its trading portfolio, especially amid the growing trade feud between the United States and China. The top two trading partners accounted for around 40 percent of South Korea's annual outbound shipments in 2018.

The country's exports sank 11.7 percent on-year in September, extending their slump to a 10th consecutive month, hurt by still weak prices of semiconductors and the yearlong American-Sino trade war.

Outbound shipments reached $44.7 billion last month, compared with the $50.6 billion tallied a year earlier, according to the data compiled by the Ministry of Trade, Industry and Energy.

If all talks under way are successful, South Korea will have FTA deals with all of its top five trading partners in Southeast Asia, including Vietnam and Singapore.

The presidential aide also said South Korea is also seeking to further increase cooperation with ASEAN nations, as well as boost tourism between the two sides.