SEOUL, Oct. 12 (Yonhap) -- Supporters of South Korea's embattled justice minister, Cho Kuk, staged another massive candlelight vigil right in front of the prosecution's headquarters in southern Seoul on Saturday, as Cho's wife was grilled again by investigators over her alleged role in the fraud and corruption scandal that has roiled the country for more than two months.

Within a stone's throw of the place, a smaller group of anti-Cho protesters also had a rally, putting police on high alert.

The streets near the Socho subway station were packed with those carrying candles or related images as well as banners and signs that read "Protect Cho Kuk," "Reform Prosecution," "Reform Media" and "Ultimatum." 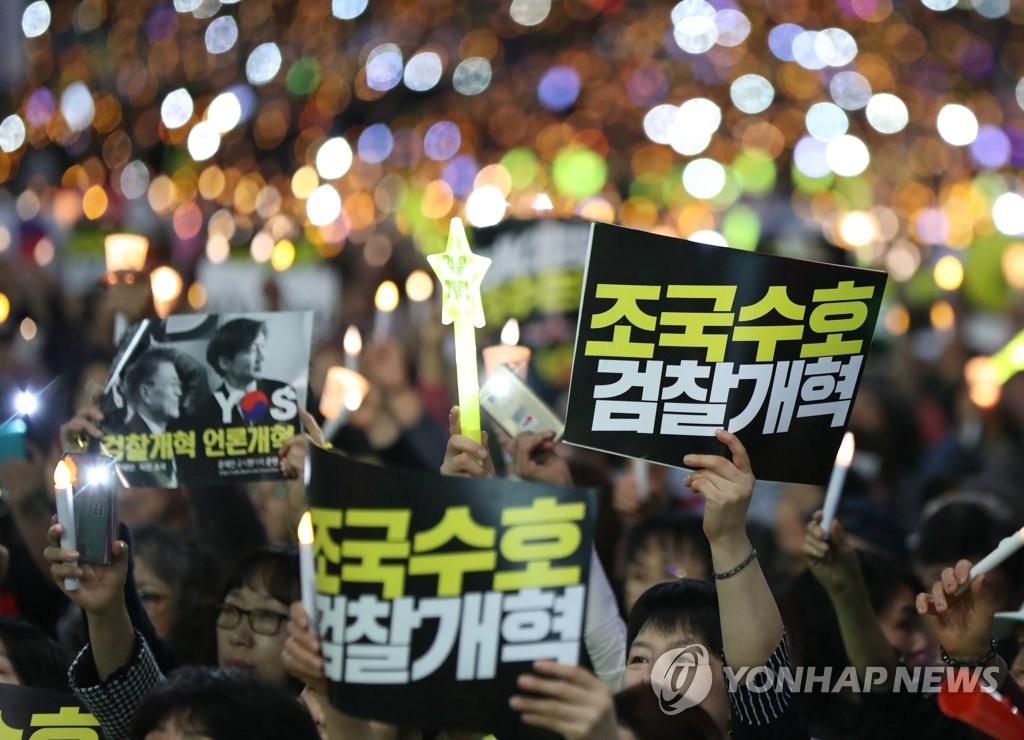 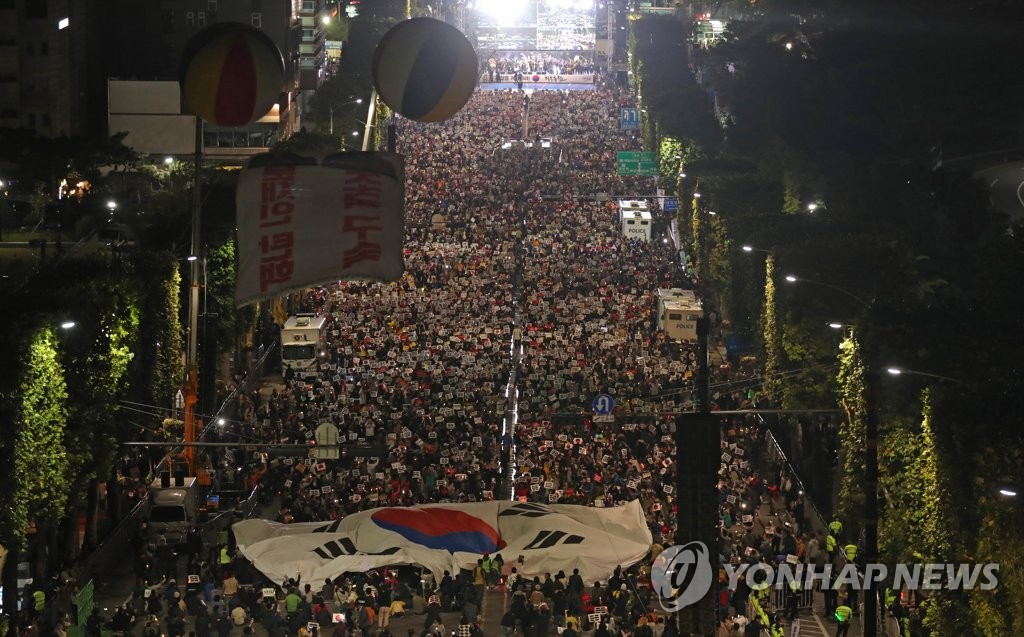 It reflects their view that state prosecutors are conducting a witch hunt against Cho, a former law professor known as an architect of the Moon Jae-in administration's prosecution reform plan.

Cheong Wa Dae and the ruling Democratic Party are seeking to give more investigative power to police and create a special agency looking into corruption cases involving high-ranking government officials.

Cho's family has faced an intensive probe by prosecutors since he was nominated in early August to lead the Ministry of Justice with a mission to complete the reform drive.

Almost no day has since passed without news of the scandal making headlines in the country.

Cho's wife, a professor, has been indicted on charges of forging a college presidential citation for use in her daughter's medical school application. She's also under probe for a questionable investment in a private equity fund. Many view the prosecution as zeroing in on the justice minister himself.

The ruling bloc and supporters of it argue that the prosecution is going too far with a clear goal of making Cho step down, leaking unconfirmed information related to the ongoing probe especially to conservative media. 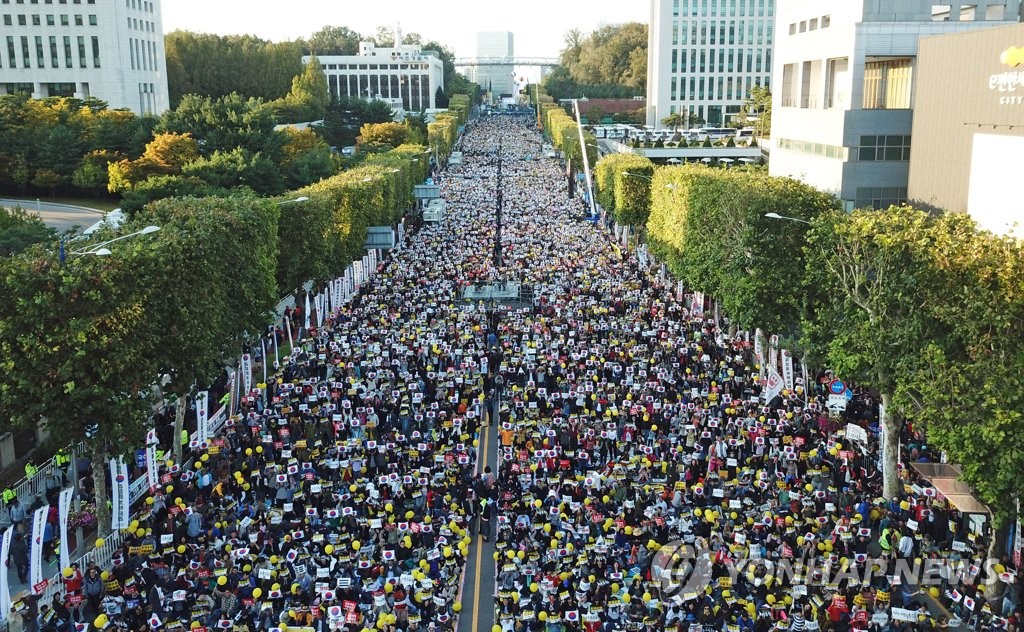 "I have a lot of anger at the prosecution and press for pushing Minister Cho and his family to the corner in a witch hunt style over nearly three months," a 46-year-old man from Suwon, Gyeonggi Province, said, joining the rally along with his wife and two children.

He said he wanted to let his kids, both of them middle school students, experience citizens' direct expression of their political views.

A 26-year-old university student claimed that while the justice minister has done nothing illegal, prosecutors and media are trying to link him with problems related to his children or brother.

The rally, which started at 6 p.m., finished at around 9:40 p.m. after a coalition of civic groups calling for judiciary reform issued what it called an ultimatum to the prosecution, political parties and media.

It urged the prosecution to accept the proposed reform plan and stop "excessive investigation" into the Cho family. It called on the National Assembly to pass pending reform bills with no further delay and demanded that conservative news outlets discontinue spreading "reckless" or fake news.

The organizing group would not reveal its official estimate of the number of participants. It also announced a plan to suspend a weekend candlelight vigil.

"It's a temporary halt, not an end," a coalition official said. "Candles will be back on anytime soon if the prosecution shows a move to resist reform." 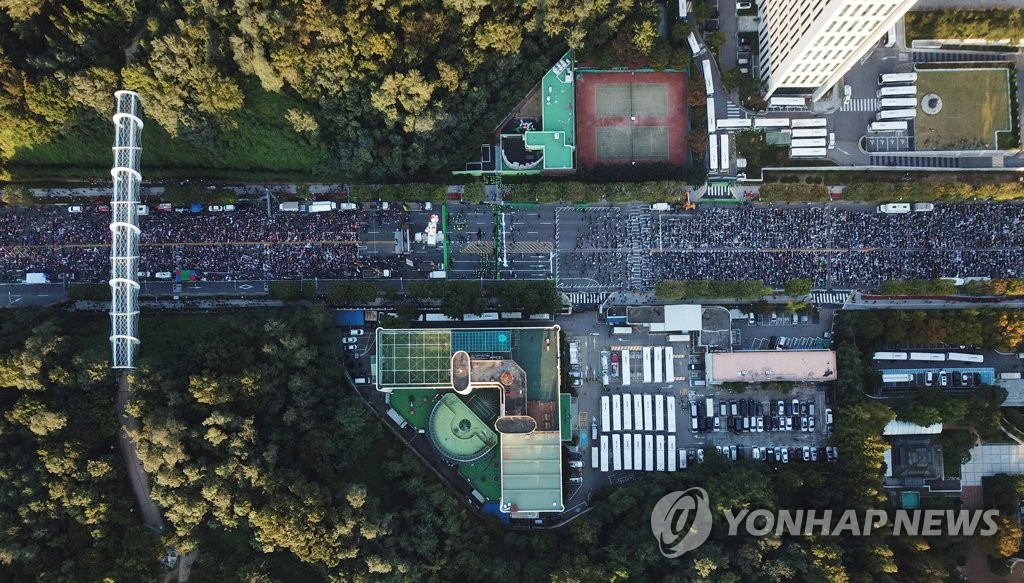 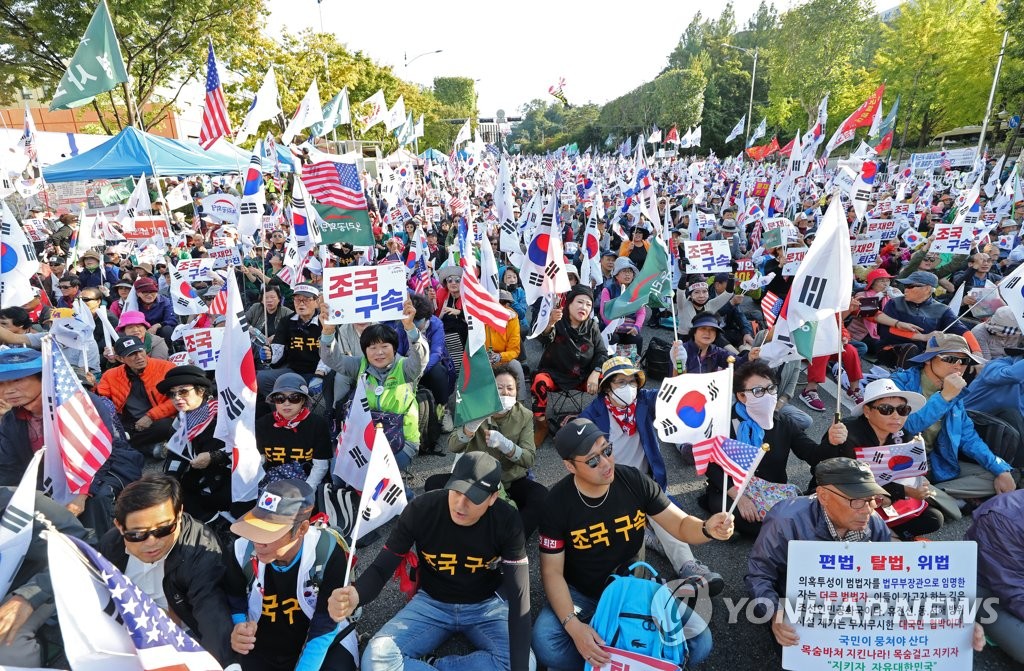 A group of conservative activists also had a rally calling for the arrest of Cho and the ouster of President Moon Jae-in.

It was organized by Our Republican Party, which supports Moon's impeached predecessor Park Geun-hye.

"I came here upset about the Moon Jae-in administration's guarding of the figure who should not have become a justice minister," a 54-year-old participant said, carrying the national flag, the Taegeukgi.

He stressed that Cho should quit immediately and go through formal investigation for lying about the private equity fund and his daughter's school entrance.

The party claimed that at least 100,000 people took part in the rally.

More then 5,000 police have been mobilized there to keep a close eye on the possibility of clashes and other incidents. 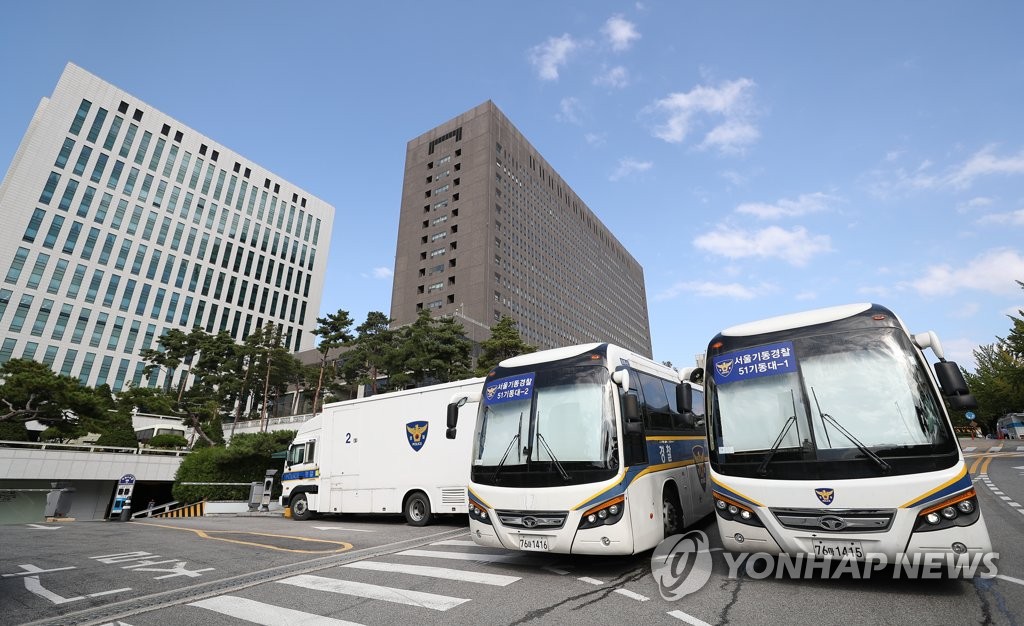