SEOUL, Oct. 16 (Yonhap) -- Guus Hiddink, who coached South Korea to the semifinals of the 2002 World Cup, received a checkup on his right knee, a hospital official said Wednesday.

Seoul JS Hospital, which specializes in the treatment of sports injuries, said Hiddink showed symptoms of arthritis, for which he was treated by local doctors in 2014.

The Dutch national did not report problems with his knee afterwards, but there have been recent indications that the 73 year-old may have hurt it again, prompting him to seek attention.

"Detailed examination using magnetic resonance imaging and muscle testing showed there were no problems with the cartilage that was treated in the past," said Song Jun-seop, director of Seoul JS Hospital.

Song said the knee should not cause any problems for years to come, as long as Hiddink does not hurt himself.

Hiddink is popular in South Korea for leading the country to the 2002 World Cup semifinals. He later became an honorary citizen of Seoul. 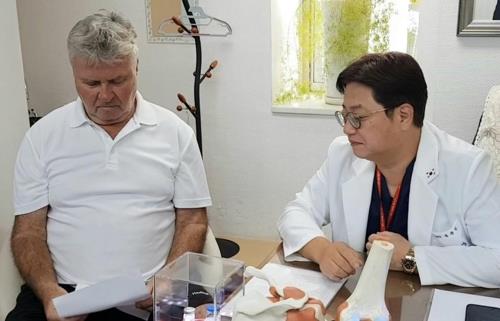