SEOUL, Oct. 17 (Yonhap) -- South Korea said Thursday that it will streamline regulations on drones in the latest move to boost the fledgling industry and create more jobs.

The road map calls for 35 revisions to existing rules and the modifying of guidelines to stimulate growth in the drone industry while enhancing public safety, the Ministry of Land, Infrastructure and Transport said.

It said such a move could result in commercial drone production adding 4.2 trillion won (US$3.5 billion) to the national economy and 16,000 new jobs, with 16.9 trillion won and 158,000 positions being created though the operation of such machines and providing various services.

The global market for commercial machines is estimated at around $3.2 billion, with the sector expected to grow at a rapid pace. 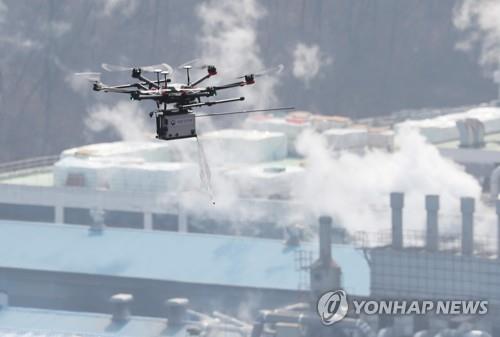 The ministry said the latest measures are centered on expanding how drones are flown, what they can carry and where they can fly.

Currently, civilian unmanned aerial vehicles (UAV) are flown almost always manually. But drones will be permitted to fly autonomously from 2025, when the technology matures.

On transportation, the goal is to make drones able to carry 10 people or 1 tons of freight for up to 500 kilometers from under 10 kilograms of cargo that can be transported 5 kilometers at the initial stage.

It said small parcel carrying drones could operate in rural areas after 2022, with such operations expanded to urban regions in 2025. Drone taxis and ambulances could make an appearance in the late 2020s and early 2030s.

The ministry then said that while drones are at present only allowed to fly in areas with almost no people, this will be changed so they can move over dense population regions from 2025, which could make them more useful.

To facilitate such changes, the government aims to give more leeway that can allow UAV to use data and aerial images they collected for diverse purposes.

In addition, the road map said a drone traffic management system will be introduced along with a flight information network to regulate so-called drone space. This can prevent accidents and promote smooth movement of the machines. The government will, moreover, codify requirements for piloting drones and registration for the machines.

The ministry said that while many rules will be changed, new regulations will invariably be created, like no fly zones around critical areas such as airports and nuclear power plants. This, it said, is needed to prevent drones from being used in an unlawful manner.

It said drone detection radars and jamming systems are under development to prevent the machines from jeopardizing public safety.

"The latest road map reflects the considerable growth potential of drones and highlights the country's commitment to meet the needs of the industry," the transport ministry said.

It said the latest road map is not final and that it is a "rolling plan" that will continuously receive feedback so it can be updated going forward.